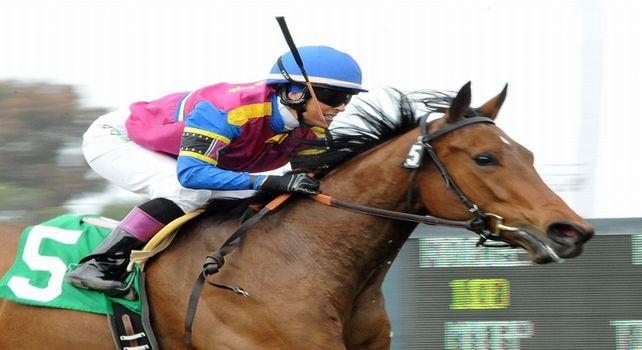 Dismissed at 10-1, Star Billing became only the sixth 3-year-old to win the $250,000 Matriarch on the first day of the Turf Festival Friday at Hollywood Park.

Completing a three victory day for trainer John Shirreffs, the daughter of Dynaformer and the Thunder Gulch mare Topliner squeezed through along the rail and surged late to defeat pacesetter Summer Soiree by a half-length in the Grade I.

Completing the mile in 1:35.45 under jockey Victor Espinoza, Star Billing, who had finished second behind Summer Soiree – beaten by a half-length - in the Grade I Del Mar Oaks in their previous meeting Aug. 20, won for the third time in seven starts for owner-breeder George Krikorian. She boosted her bankroll to $355,067.

The win was the second graded stakes upset over the Hollywood Park grass for Star Billing. She won the Grade III Senorita at 8-1 in her second lifetime start May 7.

In providing Espinoza, Krikorian and Shirreffs with their first Matriarch victory, Star Billing paid $23.40, $9 and $3.80.

“She’s run really well on this course,’’ said Shirreffs, whose two other wins Friday came for owners Jerry and Ann Moss. “The track was a little soft, a little loose for her at Keeneland (where she finished sixth in the Grade I Queen Elizabeth II Challenge Cup Oct. 15). She didn’t handle it very well.

“She hasn’t had things go her way a few times, but she’s obviously really a nice filly.’’

The victory was the first in a Grade I at Hollywood Park for Espinoza since he captured the 2009 Hollywood Derby with The Usual Q.T.

“She runs pretty well at any track…except Keeneland,’’ said Espinoza, who won two other races Friday to give him his second triple of 2011 at Hollywood Park.

“When I rode her last time there she didn’t handle the track at all. I knew you could just forget about that race. She was really unbelievable today.

“When I got alongside (Summer Soiree), my filly got a little bit intimidated, but I hit her left-handed one time and she just took off. It worked out perfectly.’’

“I think the winner was the same filly who almost got (Summer Soiree) in the Del Mar Oaks,’’ said Motion. “All three of mine (besides Summer Soiree, Motion sent out Gypsy’s Warning and Unbridled Humor) are going to leave Sunday with Sanagas.’’

Making her first appearance in California and final start of her career, Never Retreat didn’t handle the final turn well, but was able to gain third by a head over Unbridled Humor and push her earnings past $900,000 in 2011. A Matriarch win would have been the sixth graded victory this year for the 6-year-old Smart Strike mare.

Up In Time, one of the two other 3-year-olds in the race – along with sixth place finisher Quiet Oasis – unseated jockey Martin Garcia after stumbling with about a quarter of a mile to run. Both horse and rider escaped uninjured.

The Hollywood Park stewards conducted an inquiry into the incident – which also involved defending Matriarch champion Gypsy’s Warning, who wound up fifth, and  Madera Castana (seventh)– but ruled video evidence was inconclusive, so there was no change in the order of finish.