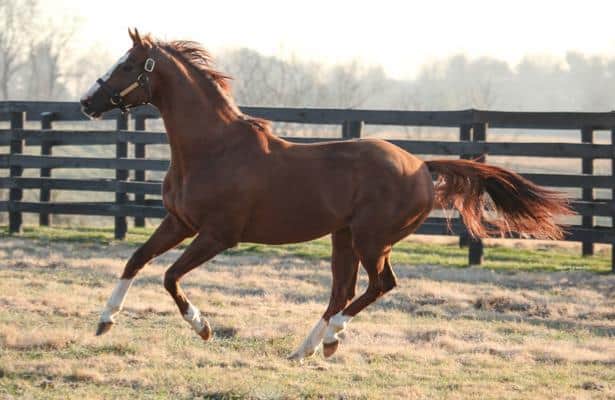 The California Chrome Syndicate has reached an agreement with the JS Company LTD. of Japan to purchase California Chrome, subject to all the Japanese government’s quarantine and exportation requirements being met, Taylor Made Stallions announced Wednesday.

As part of the agreement, the California Chrome Syndicate has the first right of refusal if California Chrome is ever sold, and upon retirement from breeding, he can live out the remainder of his life at Taylor Made. Owners Perry and Denise Martin will continue to participate in California Chrome’s breeding career in Japan.

“We were approached by representatives of the buyer, and being that California Chrome is owned by a 50-share syndicate, the offer was presented to the shareholders for a vote,” said Taylor Made’s Duncan Taylor. “Ultimately, the results were in favor of moving forward with the sale. California Chrome is the best horse we have ever owned, and he will now have the opportunity to have offspring performing in three different countries.

"California Chrome is a very special horse and means a lot to not only the team members of Taylor Made but to the thousands of fans he has across the country.”

A 2011 son of Lucky Pulpit, California Chrome stood for $35,000 this year. He's headed to Arrow Stud, joining the likes of 2019 Horse of the Year candidate Bricks and Mortar, Thunder Snow, Animal Kingdom and New Year's Day as familiar runners set to stand next year in Japan.