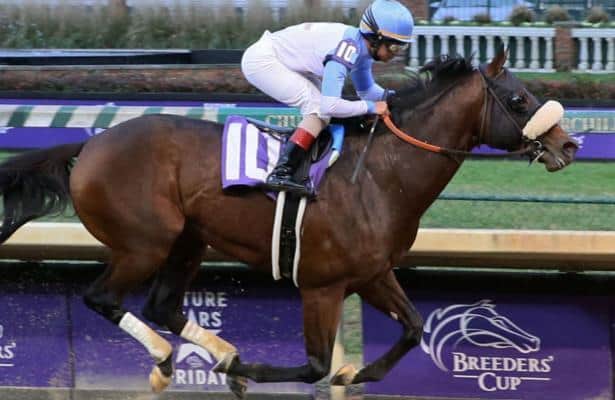 Following three straight starts against graded stakes company, Tom's d'Etat will receive a drop in class for trainer Al Stall, Jr. in the $100,000 Alydar on Aug. 2 at Saratoga.

Owned by Gayle Benson's G M B Racing, Tom's d'Etat was third last out in the Stephen Foster (G2) to Seeking the Soul after finishing second in the Alysheba (G2) to McKinzie.

His first start of the year was a distant ninth in the Pegasus World Cup (G1) in January.

Lightly raced for a 6-year-old, the Smart Strike bay horse won both of his starts at the Spa.

He broke his maiden at third asking by four lengths in August 2016 and won a second level allowance event by nine lengths the following July.

Both races were run at the Alydar's 1 1/8-mile distance.

"He worked five-eighths this morning and everything seems to be going well," Stall said. "Everything is on schedule. I'm comfortable with running him and not using the track as an excuse.

“He's coming out of two Grade 2s in a row, running second to McKinzie and then the Stephen Foster. (The class drop) should be good for him."