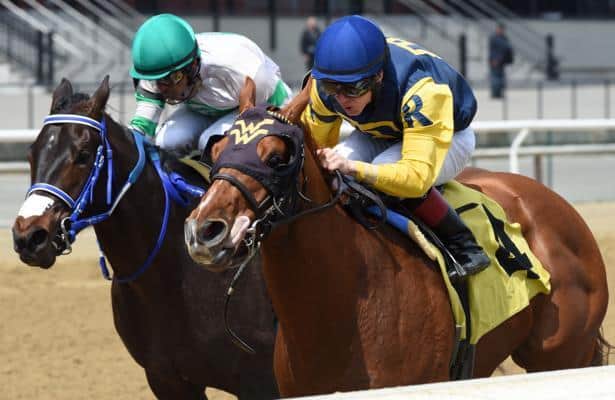 When trainer Wesley Ward bred Richie’s Party Girl to American Pharoah, he thought the combination could one day produce the 2015 Triple Crown champion’s first stakes winner as a stallion.

“The mare was a very precocious, win-early type,” said Ward, who saw just that scenario play out Saturday.

Maven, a chestnut son of American Pharoah, found the wire in time to win Chantilly’s Prix du Bois (G3) and add to an April 19 debut score at Aqueduct. Now, Ward will focus on getting American Pharoah his first Breeders’ Cup victory with the Nov. 1 Juvenile Turf Sprint at Santa Anita a longterm goal

“I’m trying to center in on the 5/8s races leading up to that,” Ward said.

“So long as he runs a credible race, I’ll probably get him back here,” the trainer said of his Keeneland base, “give him a little time to get over the races in Europe and the shipping and train him into the race.”

Ward said Maven has taken after his dam more than sire, something the others in his care by American Pharoah seem to share. The trainer decided to pair mares with the 2015 Horse of the Year after a conversation with Bob Baffert, who conditioned Pharoah.

“The way he moved, Bob thought he would have run equally as well on the grass,” Ward said. “I just took his opinion and bred to American Pharoah.”

Ward had intended to start Maven during the Royal Ascot meeting in the Norfolk Stakes (G2), but rain that week in England led the ground to soften up beyond his liking.

While Maven remains overseas, the rest of Ward’s Ascot contingent returned home Saturday. He expects the bunch, including 2-year-old Kimari, the narrow runner-up in the Queen Mary (G2), to get about 60 days off.

“Historically, if you look at the horses I’ve run there and ran well, they come back and win,” Ward said. “It’s giving them ample enough time to get over the trip.”

Success at Royal Ascot, where Ward has won 10 races, has "opened a lot of doors" domestically, too.

“A lot of people who I probably wouldn’t be training for, I have horses in my barn because of it,” he said. “Unfortunately this year was the first when we haven’t been successful in a long time, but the filly ran a big race to be narrowly defeated, and Maven vindicated the trip by winning over there.”

While Ward intends to continue unveiling precocious juveniles in the spring for return trips to England, he has diversified his breeding program to produce more distance-oriented horses. Some of those horses are already yearlings, and down the line, he’d like to live out some Kentucky Derby dreams.

“If I can’t get the clients, I know it’s a longshot to just breed my own mares,” Ward said, “but I have a chance.”