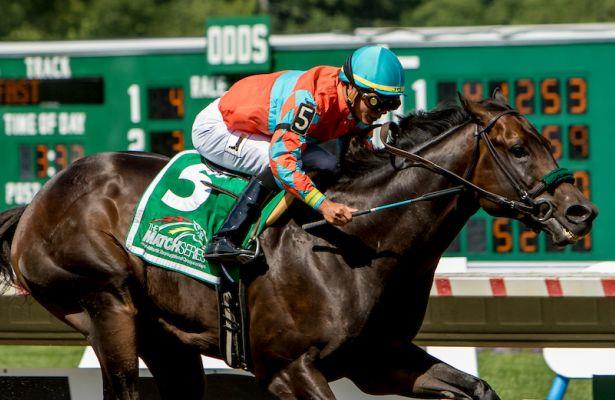 On the eve of Independence Day, Laurel Park will celebrate with some fireworks of its own with a graded-stakes quality feature event to highlight an 11-race program Friday, July 3.

Six stakes winners, two of them graded, and a veteran of the 2019 Triple Crown trail are among a field of 10 set to gather in Race 8, a $55,000 allowance for 3-year-olds and up going one mile on the main track. All told, the group has won 62 races and nearly $3.5 million in purses.

Hillwood Stable’s Maryland-bred Cordmaker, a gelded 5-year-old son of two-time Horse of the Year and 2014 Hall of Famer Curlin, will be making his season debut for trainer Rodney Jenkins. The four-time stakes winner, unraced in nine months since taking the DTHA Governors Day Handicap at Delaware Park, is the 7-2 second choice on the morning line.

“It’s no gimmee, is it? He’s going to have to run,” Jenkins said. “He hasn’t run since September, so we’ll see. He’s the same horse all the time. You can’t tell until he gets in the race. He gets in the race and then he picks it up and usually does his job. Anything can happen, of course. But he looks well. We’re pleased with him.”

Cordmaker has worked nine times since late April for his return, delayed amid the coronavirus pandemic which shut down racing for much of the country, including 2 1/2 months in Maryland until May 30. Most recently, he went four furlongs in 48.60 seconds June 29, fastest of 12 horses.

In his last race at a flat mile, Cordmaker won the 2018 Jennings at Laurel to cap his 3-year-old campaign. An eight-time winner from 17 starts, he was beaten two necks last May when third in the historic Pimlico Special (G3) at 1 1/4 miles.

“He’s the kind of horse that when you get ready to go, he’ll know. For some reason he can sense it the day of the race,” Jenkins said. “He’s doing well.”

Cordmaker will break from Post 7, one spot inside Runnymoore Racing’s Alwaysmining, the 3-1 program favorite. The 4-year-old Stay Thirsty gelding has raced four times this year with two wins, both in Laurel stakes – the one-mile Jennings and the about 1 1/16-mile John B. Campbell Memorial. They were the sixth and seventh career stakes wins for Alwaysmining, who swept Laurel’s series for 3-year-olds last year and finished 11th in the Preakness (G1).

To their inside, Colts Neck Stables’ stablemates Name Changer and Compound It also drew adjacent posts. Like Alwaysmining, Name Changer has earned over a half-million dollars, and the 7-year-old son of Uncle Mo was second to 2017 Preakness show finisher Senior Investment in the 1 1/8-mile Harrison E. Johnson Memorial on March 14 in his only 2020 start, a race where Alwaysmining ran third.

Name Changer owns three stakes wins among his eight lifetime victories, including the 2016 Richard W. Small at Laurel, and became a graded winner in the 2018 Monmouth Cup (G3). He raced just once last year, finishing third in the Swatara in November at Penn National.

“Name Changer came out of the last race at Laurel good. He’s fresh and ready to go,” Duarte said. “It seems like there will be some pace to run at there. The last time he got hurt when the pace was so slow at Laurel in the stake. There should be a better pace in there this time and I think that he’ll run big.”

Compound It, 4, captured a one-mile allowance facing older horses last summer at Laurel, and was last seen winning in a similar spot over a sloppy and sealed track in October at Penn National.

“We just basically gave him the winter off. There was nothing wrong with him. He was ready to go in April but there was no racing anywhere,” Duarte said. “They’re both doing good.”

The other graded winner in the field is Lael Stables’ homebred No Dozing, who took the seven-furlong Bold Ruler (G3) in his 2018 season finale. The Arnaud Delacour trainee, like Alwaysmining based at Fair Hill Training Center in Elkton, Md., went winless in seven tries last year with three seconds and two thirds and is two-for-four lifetime at Laurel.

Drawing the far outside post is Frank Demarco’s Honor the Fleet, winner of the 6 1/2-furlong Fire Plug on Jan. 18 at Laurel. Third in the 2017 Pegasus (G3) at Monmouth Park, he was most recently seventh in the seven-furlong General George (G3) Feb. 15 at Laurel.

“He just didn’t get the right trip [in the General George]. It didn’t unfold the way I hoped it would, but that’s horse racing. He always trains well. He’s coming up to this race really on the muscle and doing well,” trainer Louis Albertrani said. “It’s a very competitive race, but he’s doing very well.”

Richest of the group is Matthew Schera’s John Jones, a stakes winner on both turf and dirt with $593,784 in purse earnings from 44 starts. The gelded 8-year-old son of 2004 Kentucky Derby (G1) and Preakness winner Smarty Jones is 10-for-18 lifetime at one mile, with an optional claiming win, a second in the Jennings and a third in three starts this year for trainer Lacey Gaudet.

Laurel’s summer meet-leading trainer Claudio Gonzalez entered both Harpers First Ride and Tybalt, both 4. Harpers First Ride is four-for-six since being claimed last fall, with all four wins at Laurel. Tybalt has lost his last seven starts since a one-mile optional claiming triumph last summer at Delaware but was twice stakes-placed at 2 and 3, including Laurel’s Miracle Wood and Private Terms for 3-year-olds.

Completing the field is Montuori Holt and Palumbo Racing Stable’s Tattooed, a four-time winner at Laurel who finished fifth in the 2019 Maryland Million Classic.