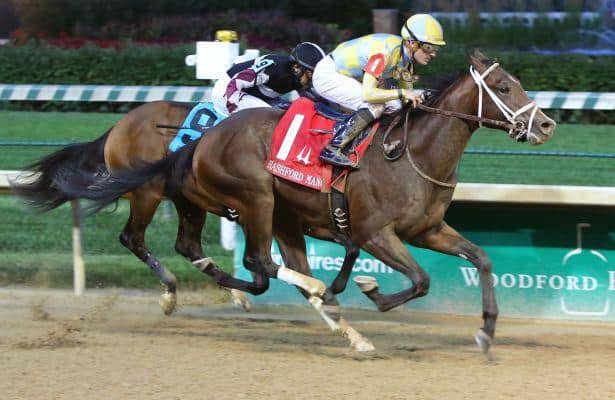 In the race immediately following the First Lady, a dozen 2-year-olds will go postward in the 103rd running of the $500,000 Claiborne Breeders’ Futurity (G1) at 1 1/16 miles on the main track.

Three graded stakes winners top the roster of contenders for the race, and favoritism likely will go to John Oxley’s Classic Empire.

Trained by Mark Casse, Classic Empire won his first two starts including the Bashford Manor (G3) at Churchill Downs. In his most recent start, he wheeled at the start of the Hopeful (G1) at Saratoga as the favorite and dumped rider Irad Ortiz Jr.

Julien Leparoux, who was aboard for the first two victories, has the call Saturday and will break from post position 11.

Also coming out of the Hopeful is Joseph Sutton’s Bitumen.

A winner at first asking at Churchill Downs and then the winner of the Sanford (G3) at Saratoga, Bitumen finished fourth in the Hopeful. Trained by Eddie Kenneally, Bitumen will be ridden by Corey Lanerie and break from post position one.

Invading from South Florida is Peacock Racing Stables’ Gunnevera. Trained by Antonio Sano, Gunnevera has won his past two races with the latter coming in the Saratoga Special (G2). Jesus Rios has the mount Saturday and will break from post position two.