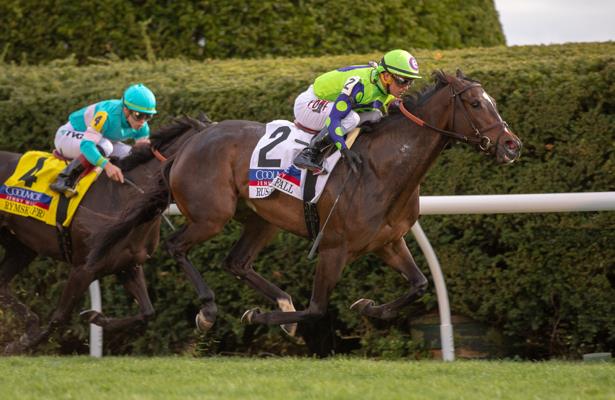 E Five Racing Thoroughbreds’ four-time Keeneland stakes winner Rushing Fall and Peter Callahan’s multiple graded stakes winner Swiss Skydiver, the leading point earner on the 2020 Road to the Kentucky Oaks (G1), are among the noted horses nominated to the 10 stakes worth a total of $2,575,000 to be run during Keeneland’s five-day Summer Meet from July 8 to 12.

The Summer Meet, which accommodates a portion of the 16-day Spring Meet that Keeneland canceled because the COVID-19 outbreak, will be held without fans but with limited owners in attendance.

“Keeneland thanks the owners and trainers who nominated horses to the Summer Meet stakes and will be supporting our racing program during this historic five-day season,” Keeneland Vice President of Racing and Sales Bob Elliston said. “We also salute the exercise riders, grooms, hot walkers and others in the stable area who have reported to work every day since the pandemic began to continue caring for these horses.

"This season would not be possible without the hard work and cooperation of countless people and organizations along with the backing of Keeneland’s corporate partners.”

The Blue Grass and Ashland both carry 170 qualifying points for the Derby and Oaks on a 100-40-20-10 scale to the first four finishers.

Click here for the list of nominees to the Summer Meet stakes and their past performances. Here is a look at those nominations:

The 32nd running of the prestigious $300,000 turf race attracted 34 nominees, led by the first- and second-place finishers in the May 25 Shoemaker Mile (G1) at Santa Anita, Raging Bull and Next Shares.

Owned by Peter Brant and trained by Chad Brown, Raging Bull is a two-time Grade 1 winner who was fourth in last year’s Maker’s 46 Mile. Next Shares, winner of Keeneland’s Shadwell Turf Mile (G1) in 2018, is trained by Richard Baltas, who is part owner of the 7-year-old.

Gary Barber owns and Mark Casse trains two other nominees of note: Got Stormy, a multiple Grade 1-winning mare who has defeated males and was second in the 2019 TVG Breeders’ Cup Mile (G1) and third in Keeneland’s 2019 Coolmore Jenny Wiley, and 2019 Preakness (G1) winner War of Will.

The 35th running of the $100,000 race, which will be contested over the Beard Course of seven furlongs, 184 feet on the main track, carries 34 qualifying points for the Kentucky Oaks on a 20-8-4-2 scale for the top four finishers.

Leading the 27 nominees is Alex and JoAnn Lieblong’s Wicked Whisper. Trained by Steve Asmussen, Wicked Whisper won last fall’s Frizette (G1) at Belmont. She has not raced since finishing fifth in the Breeders’ Cup Juvenile Fillies (G1) at Santa Anita in November.

Among the 48 nominees is the aforementioned filly Swiss Skydiver.

Another accomplished runner is Jackpot Farm’s Basin, winner of the Runhappy Hopeful (G1) last summer at Saratoga. Trained by Asmussen, Basin finished second in a division of the Arkansas Derby (G1) in his most recent start.

Other nominees of note include Ete Indien and a quartet of runners from the stable of Bob Baffert.

Ete Indien, who won the Fountain of Youth (G2) and was third in the Florida Derby (G1), is trained by Patrick Biancone. He co-owns the colt in partnership with Linda Shanahan, Sanford Bacon, Dream With Me Stable, Horse France America and D P Racing.

Spendthrift Farm, Starlight Racing and Madaket Stables’ Authentic, runner-up in the Santa Anita Derby (G1) in his most recent start, is one of the nominees for Baffert.

Trained by Brad Cox and owned by Juddmonte Farms, Bonny South has won her past three races, including the Fair Grounds Oaks (G2) in her most recent start.

Ciaglia Racing, Highland Yard, River Oak Farm and Dominic Savides’ Venetian Harbor won the Las Virgenes (G2) at Santa Anita. Trained by Richard Baltas, she was second to Swiss Skydiver in the Fantasy in her most recent start.

With a win in the Coolmore Jenny Wiley, Rushing Fall would join champions Beholder and Lady Eli as the only horses to win Grade 1 races at age 2, 3, 4 and 5 since 1976.

Other top sprinters nominated to the Madison are Grade 1 winners Guarana, owned by Three Chimneys Farm and Hill ‘n’ Dale Equine Holdings and trained by Brown, and Mia Mischief, owned by Stonestreet Stables and trained by Asmussen.

The race, for 3-year-old fillies going one mile on the turf, drew 29 nominees headlined by Robert and Lawana Low’s Sweet Melania.

Bound for Nowhere leads a list of 36 nominees for the 24th running of the $150,000, 5 1/2-furlong turf race for 3-year-olds and up. Wesley Ward trains Bound for Nowhere, who won the 2018 Shakertown and finished second in last year’s race.

Trained by Mike Maker, Zulu Alpha has won two of three starts in 2020 headlined by a triumph in the Pegasus World Turf Invitational (G1). Among his six graded stakes victories is the 2018 Sycamore (G3) at Keeneland.

Maker also trains Field Pass, a three-time stakes winner who won the Jeff Ruby Steaks (G3) in March and the Audubon at Churchill Downs in his most recent start June 20.