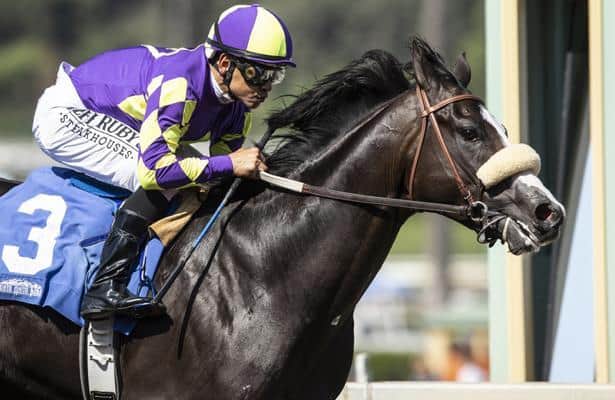 Throughout the year, the NTRA will provide a guide to the best graded stakes in North America and beyond with races listed in chronological order and all times Eastern.

Racing at Belmont Park and Churchill Downs will be featured on Fox Sports' "America’s Day at the Races.” This Saturday, NBCSN continues its simulcast of TVG's “Trackside Live," which shows live racing from Santa Anita Park and other tracks.

A graded stakes winner on both dirt and turf, Instilled Regard will seek a third graded score when competing in the Fort Marcy over the inner turf course. Owned by Larry Best's OXO Equine, the 5-year-old son of Arch is one of four contenders for trainer Chad Brown. Instilled Regard will attempt to make amends following a sixth-place finish as the lukewarm favorite in the Grade 2 Muniz Memorial Classic at Fair Grounds Race Course, where he chased a slow pace and was unable to catch wire-to-wire winner Factor This, finishing sixth.

Code of Honor will make his 4-year-old debut -- and first start since November's Breeders' Cup Classic -- in the 92nd running of the Westchester. Owned and bred by W.S. Farish, Code of Honor is looking to build on a sophomore campaign in which he captured the Grade 1 Travers Stakes at Saratoga Race Course and was elevated to first in the Grade 1 Jockey Club Gold Cup in September at Belmont. The Noble Mission colt finished his year with a seventh-place finish in the Breeders' Cup on Nov. 2 at Santa Anita Park.

Four-time Eclipse Award-winning trainer Brown will send out a quartet of challengers for the Intercontinental for fillies and mares going seven furlongs over the Widener turf course. Making her first start following an 11-month hiatus, Grade 1 winner Newspaperofrecord headlines the Brown brigade, breaking from post 5. Owned by Klaravich Stables, the 4-year-old daughter of Lope de Vega was made the post-time favorite in all six of her career starts but went winless in her trio of sophomore outings. She was last seen when running a distant ninth in the Grade 1 Belmont Oaks Invitational in July and will attempt her first trip to the winner's circle since a 6 ¾-length romp in the 2018 Grade 1 Breeders' Cup Juvenile Fillies Turf at Churchill Downs.

Swiss Skydiver seeks her third consecutive graded stakes victory as she heads a field of five sophomore fillies going 1 1/16 miles in Saturday’s Santa Anita Oaks. Based with trainer Ken McPeek in Kentucky, Swiss Skydiver’s primary opposition will likely come from Eclipse Thoroughbred Partners’ Speech. Trained by Michael McCarthy, Speech has been second in her last three starts, including the Grade 3 Santa Ysabel Stakes here two starts back on March 8. A daughter of 2015 Triple Crown winner American Pharoah, Bob Baffert’s Merneith will be stretching out off a 10 ¼-length maiden score at Oaklawn Park and could be good enough to spring an upset.

Multiple Grade 1 winner Mind Control and Phipps Stable and Claiborne Farm's rising star Performer will both bring multi-race win streaks into Saturday's Carter Handicap. Trained by Gregg Sacco, the 4-year-old Mind Control's NYRA ledger includes a pair of Grade 1 wins at Saratoga Race Course, beginning with the Hopeful as a juvenile and the H. Allen Jerkens in August to close out his sophomore season. The Stay Thirsty colt opened his 2020 campaign with a narrow nose win over Nicodemus in the Grade 3 Toboggan at Aqueduct Racetrack.

Whitham Thoroughbreds’ Four Graces, an impressive winner of a first-level allowance event three weeks ago beneath the Twin Spires, will attempt her first try at stakes competition as she tops eight 3-year-old fillies entered in Saturday’s 45th running of the Dogwood. The seven-furlong Dogwood is a designated prep race on the Road to the Kentucky Oaks and will award the Top 4 finishers 20-8-4-2 points. Four Graces, a daughter of Majesticperfection, debuted as a 7-1 winner at Gulfstream Park in March. The half-sister to multiple graded stakes winner McCraken finished fourth in her second start at Gulfstream but quickly rebounded with an emphatic 1 ¾-length score on May 16 at Churchill Downs under Julien Leparoux.

Unbeaten in three starts and a winner most recently of two graded races by a combined 10 lengths, Authentic will renew his rivalry with talented Honor A. P. as they head a field of seven sophomores going 1 1/8 miles in the Santa Anita Derby. Authentic has been nothing short of brilliant for trainer Bob Baffert in winning his past two races in gate to wire fashion. A first-out maiden winner at odds of 3-5 going 5 1/2 furlongs at Del Mar on November 9, this colt by Into Mischief aired by 7 3/4 front-running lengths going a flat mile in the Grade 3 Sham Stakes on January 4. A 2 1/4-length winner of the Grade 2 San Felipe, Authentic earned a 98 Beyer.

Santa Anita Park Race 10: Grade 1 Hollywood Gold Cup (8:12 p.m.) Locally based Midcourt, the beaten favorite in the Grade 1 Santa Anita Handicap; leading money earner Higher Power; Improbable, a Grade 1 winner at 2; and eastern-based millionaire Tenfold head a field of six 3-year-olds and up in the Hollywood Gold Cup. A winner of four races in a row this past year, Midcourt ran the best race of his career two starts back, as he went gate to wire in the Grade 2 San Pasqual Stakes on February 1, winning by 3 ½ lengths while earning a career-best 104 Beyer Speed figure.