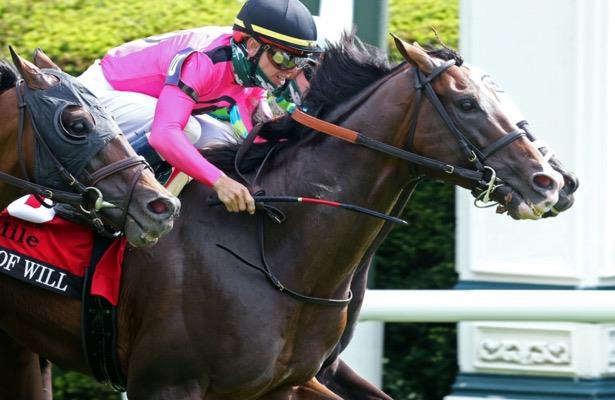 Throughout the year, the National Thoroughbred Racing Association will provide a guide to the best stakes races in North America and beyond. Races are listed in chronological order (all times Eastern). Full entries can be found by clicking the race name.

All three races at Woodbine will be broadcast live on NBCSN as part of their Challenge Series “Win and You’re In” TV schedule.

Racing from Churchill Downs and Belmont Park will be showcased on “America’s Day at the Races”, the NYRA-produced program which airs on either FS1 or FS2.

Lael Stables' Magic Attitude, a Group 3 winner in France, will make her North American debut in the 10-furlong Belmont Oaks Invitational. By Galileo and out of the Group 1-winner Margot Did, Magic Attitude was bred in Great Britain by Katsumi Yoshida and is a full-sister to 2018 Group 2 Prix de Sandringham winner Mission Impassible, who is also multiple Grade/Group 1-placed. Magic Attitude presents an impressive ledger that includes a victory in the Group 3 Prix Vanteaux in May when racing off a nearly eight-month layoff for former conditioner Fabrice Chappet.

Trainer Graham Motion has a two-pronged entry for the 1 ¼-miles Singspiel in stakes winner Standard Deviation and Nakamura. Standard Deviation traveled to Doha earlier this year where he ran second in the H.H. The Amir Trophy, but the son of Curlin has been off the board in his last two starts including a seventh-place run in the Grade 1 United Nations Stakes. Nakamura has finished third in his last two outings with his latest effort coming in an allowance optional claiming race on August 16.

Starship Jubilee, Canada’s reigning Horse of the Year, will take on seven rivals, including 2-1 morning line favorite War of Will and undefeated 3-year-old Shirl’s Speight, in Saturday’s 24th running of the Woodbine Mile. Starship Jubilee will make her 38th career start in the fall turf classic for owner Blue Heaven Farm and trainer Kevin Attard. The bay mare won her first four starts this year before finishing fourth in her most recent engagement, the Grade 1 Diana at Saratoga on August 23.

Last year, War of Will took the Grade 3 Lecomte Stakes and Grade 2 Risen Star Stakes at Fair Grounds before his Preakness Stakes victory in mid-May. The son of War Front heads into Saturday’s engagement off a nose win in the Grade 1 Maker’s Mark Mile over the Keeneland turf on July 10.

Seven first-year stars take their talents to the E.P. Taylor Turf Course in Sunday’s Summer Stakes. Hall of Fame trainer Mark Casse will send out a pair of hopefuls in Dolder Grand and Gretzky the Great.  After a runner-up effort in his first career start on July 12, Gretzky the Great could net a natural hat trick of his own with a win on Saturday. He broke his maiden via a 4 ¼-length victory on August 2 and followed it up with a gutsy neck score in the Soaring Free Stakes, traveling 6 ½ panels on the E.P. Taylor Turf Course on August 23.

A year after the Maryland-based trainer shipped in with Divisidero to win the Grade 3 Red Bank Stakes, Kelly Rubley will look for history to repeat when she sends out Laurel track record holder Top Line Growth in Sunday’s Salvator Mile, the feature on Monmouth Park’s 14-race card that day. After making his 4-year-old debut in impressive fashion with a 5½-length romp at Laurel on Aug. 14 – a race in which he threatened his own track record for a mile – Top Line Growth will face seven challengers in the Salvator Mile his quest for his first graded stakes score.

Trainer Roger Attfield and owner/breeder Charles Fipke will be hoping to land a Grade 1 prize with Lady Speightspeare, who will be making just her second lifetime start but looms as the horse to beat in the $250,000 Natalma Stakes, a one-mile turf race which attracted seven two-year-old fillies.

Attfield was not surprised when Lady Speightspeare was in the spotlight in her debut, scoring by 3 ¾ lengths over seven furlongs on the E.P. Taylor Turf Course. Last Sunday, Lady Speightspeare turned heads with a five-furlong breeze in :58.60 on the training track turf course.