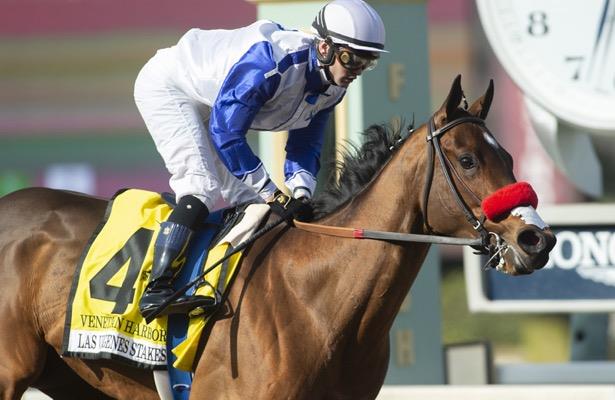 Grade 2 winner Venetian Harbor headlines a deep field of 10 3-year-old fillies for the 22nd running of the Raven Run, contested at seven furlongs. Trained by Richard Baltas, Venetian Harbor will be making her first start since finishing second to Gamine in the Test Stakes (G1) at Saratoga on Aug. 8. Prior to that, she had finished second to Speech in the Ashland Stakes (G1) here and to Swiss Skydiver in the Fantasy Stakes (G3) at Oaklawn Park with both those races being two-turn tests going 1 1/16 miles.

A four-time stakes winner in search of her first graded victory, California-bred Warren’s Showtime heads a field of seven sophomore fillies going one mile on turf in the Autumn Miss Stakes. Owned by Ben and Sally Warren and bred by Ben Warren, Warren’s Showtime was most recently a close third in the Del Mar Oaks (G1) and is the leading money earner in the field with $460,251.

After running second in last year's edition, the Chad Brown-trained Olympico (FR) will get another chance to earn a trip to the winner's circle when he competes as part of a five-horse field in the Knickerbocker for 3-year-olds and up going 1 1/8 miles on the inner turf. The Knickerbocker was originally scheduled for the Oct. 12 holiday card but was moved to due to inclement weather. That provided Olympico with a few days of extra rest as he makes his first appearance since running fifth in the 1 1/16-mile Lure on Sept. 7 at Saratoga Race Course.

Trainer Gail Cox will look to net the stakes double with Count Again in the Northern Dancer Turf Stakes. The lightly raced five-year-old son of Awesome Again has been impressive over his six lifetime outings. On Sept. 19, the bay gelding, despite being heavily steadied into the far turn, drove to the front outside of the eighth-pole and secured a 1 ¼ length win in the Singspiel Stakes (G3). It was the first stakes engagement for Count Again, who Cox is counting on once again to come up big on the Woodbine grass.

Trainer Gail Cox has a trio of talented turfers taking up the Sam-Son Farm charge, namely, Rideforthecause in the E.P. Taylor, as well as Count Again and Say the Word in the Northern Dancer. A four-year-old daughter of Candy Ride (ARG), Rideforthecause rolls into the E.P. Taylor off two straight scores, both of them contested at Woodbine. After an allowance victory at 1 1/16 miles on the Toronto oval Inner Turf on August 1, the bay was back in the winner’s circle on Sept. 12, winning the Canadian Stakes (G2) at the distance of about 1 1/8 miles on the E.P. Taylor Turf Course.

West Point Thoroughbreds, William Sandbrook, William Freeman and Cheryl Manning's Decorated Invader will see a cutback in distance when competing against fellow sophomores in the 46th running of the Hill Prince going one mile over the Widener turf. Trained by Christophe Clement, Decorated Invader arrives off a fifth-place finish in the Saratoga Derby on Aug. 15. The Saratoga Derby was the first loss of the year for Decorated Invader, who captured the Cutler Bay on Mar. 28 at Gulfstream Park in his 2020 bow before winning the Pennine Ridge (G2) on June 20 at Belmont Park and the Hall of Fame (G2) on July 18 at Saratoga.

Calumet Farm’s Siberian Iris (IRE), second against the boys this summer in the San Juan Capistrano (G3) at Santa Anita, tops a field of six fillies and mares in the 1 ½-miles Dowager. Trained by Richard Mandella, Siberian Iris stayed at Keeneland following a fifth-place finish in the TVG Stakes at Kentucky Downs on Sept. 15.

A field of nine headed up by multiple graded stakes winner Silent Poet are set to contest the Nearctic going six furlongs on the turf. Silent Poet has won three of his last four starts and enters off of an allowance win at Woodbine on Sept. 27. Among the top challengers are defending Nearctic winner City Boy.

Cannon Thoroughbreds homebred Smooth Like Strait returns to Southern California and will try to stretch his speed to 1 1/8-miles on turf as he heads a field of nine sophomores in the Twilight Derby. A resounding 2 ½ length winner of the La Jolla Handicap (G2) two starts back, Smooth Like Strait, who is trained by Michael McCarthy, finished fourth as the 6-5 favorite in the American Turf (G2) at Churchill Downs on Sept. 5 and will likely vie for favoritism with midwestern invader Field Pass.