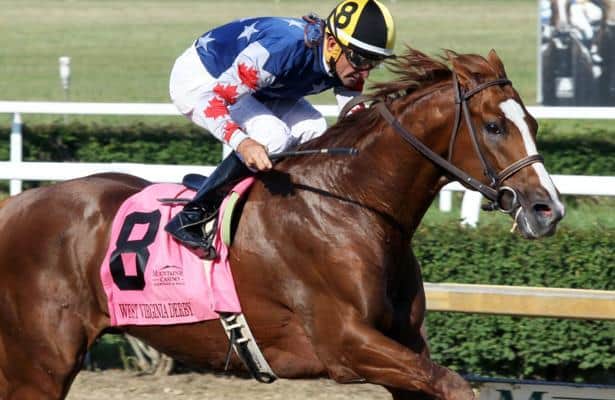 The Grade 1 Metropolitan Handicap, which offers a berth in the Breeders' Cup Dirt Mile in November at Keeneland, headlines a stellar card offering five graded stakes on Saturday at Belmont Park.

Slated as Race 9 on Saturday's 11-race card, the Met Mile will be featured live on NBC from 5 - 6 p.m ET. Saturday’s one-hour program will also include the Grade 3 Poker Stakes, featuring Eclipse Award finalist Got Stormy.

America's Day at the Races, produced by the New York Racing Association, Inc. (NYRA) in partnership with FOX Sports, returns on FOX Sports and MSG+ for holiday coverage and analysis of the best in Thoroughbred racing from Belmont Park. The national telecast will air through Sunday on FS1, FS2 and MSG+, highlighted by the blockbuster Met Mile card.

TVG will be live on site for opening weekend at Monmouth Park and will feature holiday racing from across the country including the Grade 3, $150,000 Los Alamitos Derby on Saturday. On both Saturday and Sunday morning, fans of international racing can tune in for world class racing from England featuring the return of champion Enable (GB) who will try to defend her title in the Group 1 Coral-Eclipse Stakes. Post time is 10:35 a.m. ET.

Two-time winner Reagan's Edge will make her stakes debut against four other sophomore fillies in the 18th running of the Victory Ride going 6 ½ furlongs. Trained by Cherie DeVaux, Reagan's Edge was a runaway nine-length debut winner going six furlongs on September 24 at Indiana Grand Race Course defeating next-out winners Competitive Fire and Pranked. Following a six-month layoff, the chestnut daughter of second crop-sire Competitive Edge was third beaten 5 ½ lengths in her seasonal bow before defeating winners with a last-to-first rally in a first-level Churchill Downs allowance race on May 16.

Graded stakes winner Comical seeks to end a seven-race losing skid when she breaks from the rail in a field of eight for the 1 1/16-miles Delaware Oaks. Trained by Hall of Famer Steve Asmussen, Comical last visited the winner’s circle when she captured the Grade 3 Schuylerville Stakes at Saratoga last July. The daughter of Into Mischief most recently finished second in the Gardenia Stakes at Oaklawn Park May 1.

The Eclipse, run at 1 1/16 miles on the Toronto oval Tapeta, has attracted seven hopefuls for the 65th running of the stakes for four-year-olds and up. Three-time stakes winner Cooler Mike, a five-year-old son of Giant Gizmo, goes after his first graded stakes title. Bred and owned by father and son duo Mike and Nick Nosowenko, the gelding is one of the most consistent competitors on the Woodbine grounds, having assembled a 6-4-5 record from 21 career starts.

Gary Barber's Got Stormy will once again take on the boys as she looks for the first win of her 2020 campaign in Saturday's Poker Stakes, a one-mile turf test for older horses. In August, Got Stormy became the first filly to win the Grade 1 Fourstardave, in its 35th running, besting the boys at one mile over a firm inner turf in a track record 1:32 flat at Saratoga Race Course. Trained by Hall of Famer Mark Casse, Got Stormy would face males in her next two starts finishing second in both the Grade 1 Woodbine Mile, over soft going, and Grade 1 Breeders' Cup Mile at Santa Anita. 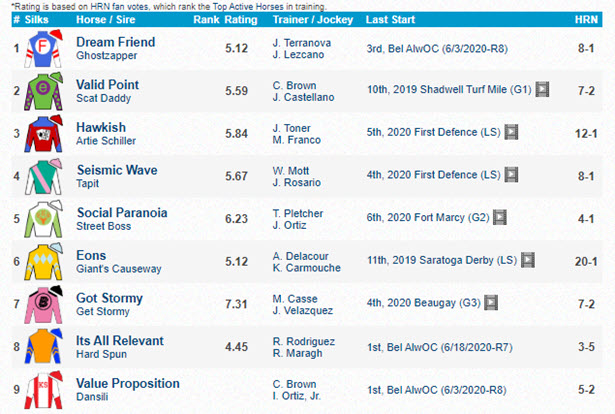 Otter Bend's Gufo tops the Grade 3 Kent Stakes at Delaware Park, a 1 1/8-miles grass affair which has attracted a field of eight 3-year-olds. Gufo will try to extend his current winning streak to four. The Kentucky-bred trained by Christophe Clement, started his career with a third in an Aqueduct turf maiden on November 17 and followed with three successive turf victories all at Gulfstream Park. In his most recent, he won the $75,000 English Channel Stakes on May 2.

An eight-horse field boasting a combined 20 graded stakes victories, led by Grade 1-winning multimillionaires Code of Honor and McKinzie, make up a talented group assembled for Saturday's 127th running of the Grade 1 Met Mile. Code of Honor, a $2.4-million earner and winner of last year's Grade 1 Travers Stakes and Grade 1 Jockey Club Gold Cup, continued to build on his graded stakes winning form in his 2020 bow when scoring a victory in the Grade 3 Westchester Stakes on June 6. Owned by Mike Pegram, Karl Watson and Paul Weitman, McKinzie was a troubled second beaten three-quarters of a length to eventual champion Mitole in last year's running of the Met Mile, where he lacked racing room down the stretch, found a hole to the inside of runners and made a late move to complete the exacta.

Sadler's Joy has twice finished in the money in the Grade 1 Manhattan and will look to earn a trip to the winner's circle in the race's 119th edition on Saturday. Sadler's Joy has come tantalizing close to a Manhattan win for trainer Tom Albertrani, finishing a neck behind Spring Quality as part of a blanket finish in 2018. The year prior, the son of Kitten's Joy ran third, 1 ½-lengths back to winner Ascend. Off a three-month layoff, Sadler's Joy returned to New York to run third in the 1 3/8-mile Tiller Stakes on June 4 at Belmont.

Saturday's Suburban Stakes, a 1 1/4-mile test, will feature the one-two-three finishers of last year's Grade 1 Belmont Stakes as Sir Winston, Tacitus and Joevia renew their rivalry. Tracy Farmer's Sir Winston, trained by Hall of Famer Mark Casse, was a 10-1 upset winner of the 2019 Belmont Stakes, outkicking Tacitus for a one-length win. Sir Winston made a successful seasonal debut with a 2 ¼-length score in an optional-claiming mile at Aqueduct Racetrack on January 31. After traveling for the Dubai World Cup, which was cancelled amid the COVID-19 pandemic, Sir Winston made his belated return on June 11 on a sloppy Belmont strip in the 1 3/8-mile Flat Out, running second by 5 ¼-lengths to Suburban rival Moretti.

Multiple Grade 1-winner Bellafina headlines a field of seven entered for the 6 ½-furlong Great Lady M. Stakes. Trained by Simon Callaghan, Bellafina enters off a victory in the Grade 3 Desert Stormer Stakes at Santa Anita Park on May 17. That win was the first for the daughter of Quality Road since her triumph in the 2019 Grade 1 Santa Anita Oaks.

*Rating is based on HRN fan votes, which rank the Top Active Horses in training.
Belmont Park Metropolitan Metropolitan (2020)