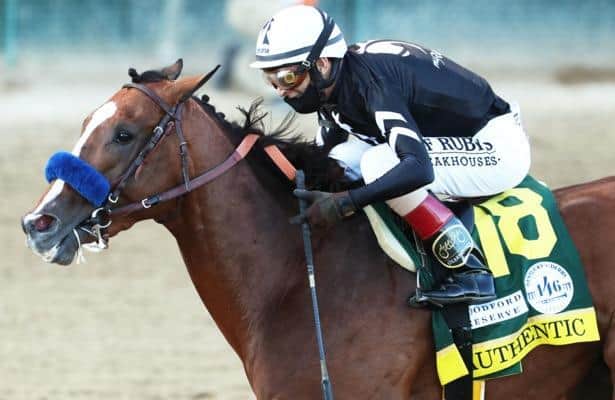 Throughout the year, the NTRA will provide a guide to the best stakes races in North America and beyond. Races are listed in chronological order (all times Eastern). Full entries can be found through the link for each race.

The 145th edition of the Preakness Stakes headlines a spectacular weekend of racing that also features the opening of Keeneland’s fall meet, which hosts a total of nine Breeders’ Cup Challenge Series “Win and You’re In” races from Friday to Sunday in preparation for the World Championships at Keeneland on November 6-7. The Preakness was moved from its original May date due to the coronavirus pandemic and will be contested without fans in attendance.

NBC will broadcast the Preakness Stakes during its coverage which runs from 4:30-6 p.m. ET.

The entire Keeneland meet will be televised on TVG. NBCSN will also pick up a one-hour broadcast of TVG's "Trackside Live" on Friday from 4-5 p.m. ET.

TVG coverage will also continue at Santa Anita this weekend and on Sunday, fans of international racing can tune in and watch champion Enable (GB) attempt to make history and win the Prix de l’Arc de Triomphe for the third time. Enable, trained by John Gosden and ridden by Frankie Dettori, won this race in 2017 and 2018 and was second last year. Post time is approximately 10:05 a.m. ET.

Racing from Belmont Park will be showcased on the NYRA-produced “America’s Day at the Races” show, airing on either FS1 or FS2. A special edition program of "America's Day at the Races" will also air Sunday morning from 9:30-11 a.m. ET, broadcasting races from Longchamp in Paris highlighted by the Prix de l’Arc de Triomphe.

Juliet Foxtrot (GB) and Varenka, graded winners in 2019, will seek their first stakes score this season in the 1 1/16-mile Gallorette on grass. Augustin Stable's homebred filly Varenka showed so much promise as a 2-year-old that she raced in the Breeders' Cup Juvenile Fillies Turf as a maiden and last year won three of five starts, topped by a dead-heat victory in the Grade 2 Lake Placid Stakes at Saratoga. The daughter of Hall of Famer Ghostzapper is winless in three tries in 2020. In her most recent outing, she was fifth, beaten 2 ¼ lengths, as the 3-1 favorite in the One Dreamer at Kentucky Downs.

Alex and JoAnn Lieblong's Grade 1 winner Wicked Whisper, making just her sixth career start, looks to return to the winner's circle for the first time in nearly a year when she lines up against six rivals in the Miss Preakness. Wicked Whisper debuted last August at Saratoga with a popular front-running 6 ¼-length triumph. She was stepped right into stakes company by Hall of Fame trainer Steve Asmussen and captured the Grade 1 Frizette in similar fashion at Belmont Park.

From there, Wicked Whisper ran fifth after pressing the pace in the Breeders' Cup Juvenile Fillies, exiting the race with a minor leg issue. She didn't kick off her 3-year-old season until June 10, fading to be fourth behind Four Graces in the Grade 3 Beaumont Stakes at Keeneland.

Already a four-time winner of the race, Hall of Fame trainer Shug McGaughey will go after No. 5 with Maryland-loving multiple graded-stakes winner Doctor Mounty in the Dinner Party - previously run as the Dixie. Doctor Mounty snapped a five-race losing streak when he returned from a brief freshening with a front-running 1 ¾-length triumph in the 1 1/16-mile Henry S. Clark September 7 at Laurel Park. It was his first victory since his previous trip to Maryland, when the now 7-year-old gelding rallied to win the Prince George's County by a length last June.

Last fall, trainer John Terranova sent an unknown minor stakes winner from New York to Maryland, one that had been competitive in graded company without success, in search of a breakthrough race. Killybegs Captain delivered, springing a mild upset in the Frank J. De Francis Memorial Dash. Though the horse and the venue have changed, Terranova is looking to repeat the pattern with Stan the Man Saturday at Pimlico Race Course. Stan the Man is a two-time stakes winner, taking the 1 1/8-mile Queens County last December at Aqueduct and the six-furlong Tale of the Cat last time out August 20 at Saratoga.

Frank Fletcher Racing Operation's sophomore filly Frank's Rockette will face elders after winning three straight races in the Gallant Bloom going 6 ½ furlongs over the main track. Trained by Hall of Famer Bill Mott, Frank's Rockette has gone off as the favorite in all nine of her lifetime starts and has never finished worse than second. She is 3-2-0 this year with each start at a different track.

Lawrence and Jennifer Goichman's Shawdyshawdyshawdy will make his second career stakes start in the Pilgrim, a 1 1/16-mile turf test for juveniles. Trained by Jorge Abreu, the Summer Front bay graduated impressively on debut in a 1 1/16-mile maiden special weight on August 1 on the Saratoga turf. He followed with a deceptively good fourth on September 7 in the one-mile Juvenile at Kentucky Downs.

Leinster, winner of this past July’s Grade 2 Shakertown, tops an evenly matched field of nine turf sprinters in the Woodford contested at 5½ furlongs. Leinster has not raced since posting a head victory in the Shakertown. Second in the Woodford last year, Leinster will be ridden by Luis Saez and break from post position eight.

Grade 1-winning multimillionaires Channel Maker and Sadler's Joy will face one another for the 15th time, while each making their respective fourth straight appearance in Saturday's 43rd running of the Joe Hirsch Turf Classic over the Widener turf. Channel Maker, winner of the 2018 Joe Hirsch Turf Classic, will attempt to be the first non-consecutive winner of the race since Val's Prince won in 1997 and 1999. Woodslane Farm's homebred Sadler's Joy also makes his fourth appearance in the Joe Hirsch but is still in search of his first victory, having finished fourth in 2017 and third in the past two editions.

KMN Racing’s Sneaking Out, riding a two-race graded stakes win streak, headlines a field of seven fillies and mares in the Thoroughbred Club of America, a “Win and You’re In” race for the $1 million Breeders’ Cup Filly and Mare Sprint. Trained by Jerry Hollendorfer, Sneaking Out won the Grade 2 Great Lady M. at Los Alamitos on July 4 and followed that with a 3¾-length victory as the favorite in the Grade 3 Rancho Bernardo at Del Mar on August 21.

W.S. Farish homebred Code of Honor, a multiple Grade 1-winner trained by Hall of Famer Shug McGaughey, leads a talented field of five in the Kelso Handicap, a one-turn mile on the main track for 3-year-olds and upward. The 4-year-old Noble Mission colt opened his current campaign with a half-length score over Kelso-rival Endorsed in the Grade 3 Westchester traveling 1 1/16-miles over a muddy Belmont main. The $2.5-million earner followed with a closing third in the Met Mile on July 4 and was subsequently an even fourth in the Grade 1 Whitney on August 1 at the Spa.

An evenly-matched field of 11 fillies, led by graded-stakes winners Bonny South, Hopeful Growth, Perfect Alibi and Project Whiskey, are set to gather for the 96th running of the Black-Eyed Susan. Juddmonte Farms homebred Bonny South was rerouted to the Black-Eyed Susan following the announcement in mid-August that it was to join the Preakness lineup. The chestnut daughter of multiple graded-stakes winning sprinter Munnings tuned up for the race with a five-furlong work in 1:01 Saturday morning at Churchill Downs.

Trainer Chad Brown is well represented in the First Lady Stakes, a “Win and You’re In” race for the $2 million Breeders’ Cup Filly & Mare Turf. Uni (GB), the champion grass mare of 2019, will try to become the first repeat winner of the First Lady as she headlines a field of six. Uni used the First Lady last year as a springboard to victory over the boys in the Breeders’ Cup Mile at Santa Anita. She finished seventh as the favorite in her most start in the Grade 1 Fourstardave against males at Saratoga and prior to that was third in the Grade 1 Just a Game to stablemate and First Lady rival Newspaperofrecord (IRE). Newspaperofrecord, winner of the 2018 Breeders’ Cup Juvenile Fillies Turf at Churchill Downs, finished second in the Grade 2 Distaff Turf Mile on September 5 at Churchill Downs.

A thrilling finish to the Saratoga Derby Invitational in August saw the top-five finishers separated by less than a length. The trifecta from that contest - Domestic Spending, Gufo and No Word - will engage again as part of a talented nine-horse field in the Belmont Derby Invitational.

Otter Bend Stables' Gufo ran second by a head to Domestic Spending in the 1 3/16-mile Saratoga Derby and will look to turn the tables in a rematch for trainer Christophe Clement. The Declaration of War colt has won four of his six career starts, with his third-place debut effort in November at Aqueduct marking his only other non-winning effort.

Godolphin homebred Essential Quality, a flashy winner on Kentucky Derby Day at Churchill Downs, headlines a field of nine 2-year-olds for the Breeders’ Futurity, a “Win and You’re In” race for the $2 million Breeders’ Cup Juvenile.

Essential Quality is on the same path for Godolphin that Maxfield was in 2019: win a one-turn race in September at Churchill and go straight into the Claiborne Breeders’ Futurity. Trained by Brad Cox, Essential Quality won that debut by 4 lengths going 6 furlongs and since has come back to work twice at Churchill Downs with the most recent being a :59.80 move over 5 furlongs last Saturday.

Kentucky Derby winner Authentic, the No.1-ranked horse on the NTRA Top Three-Year-Old Poll, will headline a field of 11 sophomores entered for the 145th Preakness Stakes, which will bring down the curtain on a most unusual 2020 Triple Crown. The Bob Baffert-trained colt was installed as the 9-5 morning-line favorite for the 1 3/16-mile classic that traditionally has been in mid-May.

In a quest to win a record eighth Preakness, Baffert will also saddle Thousand Words, who is rated at 6-1.

Bruce Lunsford's Art Collector is rated second at 5-2 in the Preakness morning line for his quest to win a sixth straight race. The son of 2006 Preakness winner Bernardini had earned his way into the Kentucky Derby field with a victory in the Grade 2 Blue Grass Stakes at Keeneland but missed a start in the Run for the Roses due to a minor foot issue.

Bowies Hero will attempt to become the third horse to win the Shadwell Turf Mile in consecutive years when he faces 10 rivals Saturday in the 35th running of the race. Trained by Phil D’Amato, Bowies Hero will be trying to join Gio Ponti (2010-2011) and Dumaani (1995-1996) as the only repeat winners in the race that is a “Win and You’re In” test for the $2 million Breeders’ Cup Mile. To repeat, Bowies Hero will have to get by a quartet of runners trained by Chad Brown headed by two-time Grade 1 winner Raging Bull (FR).

Trainer Mark Glatt’s venerable 6-year-old gelding Sharp Samurai and Peter Miller’s razor sharp 4-year-old colt Mo Forza head a field of seven 3-year-olds and up in the City of Hope Mile at Santa Anita. A winner of the 2018 City of Hope Mile and most recently a solid second on dirt in the Grade 1 Pacific Classic at Del Mar August 22, Sharp Samurai will also be cutting back in distance a quarter mile, while Mo Forza, a 4-year-old colt by Uncle Mo, comes off a stirring 4 ¼ length win on turf in the Grade 2 Del Mar Mile Handicap Aug. 23.