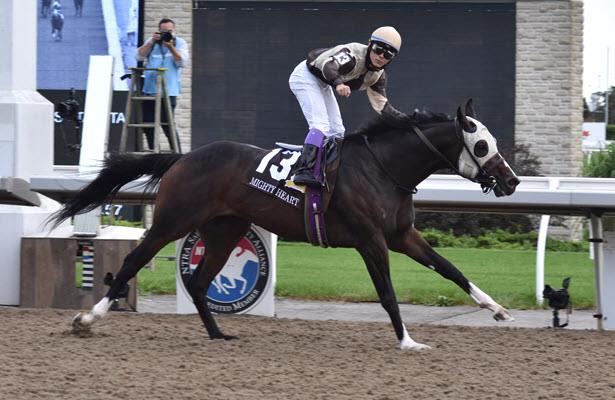 Mighty Heart will continue his quest to join an elite group of horses to sweep all three legs of the Canadian Triple Crown this Saturday in the Breeders’ Stakes. Trained by three-time Queen’s Plate winner Josie Carroll, Mighty Heart headlines the final jewel of the tri-surface series for Canadian-bred 3-year-olds, which concludes on Woodbine’s world-renowned E.P. Taylor Turf Course with the longest leg at the distance of 1 ½-miles. The son of Dramedy, bred and owned by Lawrence Cordes, is the even-money morning line favorite in the field of 12 having already scored wins in the $1 million Queen’s Plate at 1 ¼ miles over Woodbine’s Tapeta track on Sept. 12 and the $400,000 Prince of Wales at 1 3/16 miles over Fort Erie’s dirt course on Sept. 29.

Unbeaten in four starts by a combined 25 ½ lengths, trainer Mark Glatt’s Magic At Midnight will try stakes competition for the first time as she squares off with Wesley Ward’s multiple stakes winning Jo Jo Air in the Senator Ken Maddy Stakes which has attracted a field of seven at 5 ½ furlongs over the Santa Anita turf. Claimed for $30,000 out of a first-out 13 length romp on July 14 at Los Alamitos, Magic At Midnight has been nothing short of tremendous in three subsequent starts for Glatt, including a 2 ¾ length score in her only try on grass two starts back in a turf allowance at Del Mar Aug. 14.

Reeves Thoroughbred Racing and Tango Uniform Racing's Feel Glorious will look to bounce back from an off-the-board finish in last month's Noble Damsel (G3) with another graded stakes appearance, serving as one of two entrants for trainer Christophe Clement in the Athenia going 1 1/16 miles over the inner turf course. Feel Glorious is looking to recapture the form she showed earlier in her 4-year-old campaign, including a half-length victory in the Perfect Sting going the Athenia's distance on Aug. 14 at Saratoga Race Course. Cut back to one mile in the Nobel Damsel (G3) on Sept. 26 at Belmont, Feel Glorious ran seventh after going five-wide in the upper stretch and failing to rally, marking just the first time in her last seven starts the English-bred daughter of Bated Breath did not hit the board.

In top form and bidding for her third consecutive win, trainer Phil D’Amato’s Raymundos Secret, along with Simon Callaghan’s classy Maxim Rate, head a field of seven in Sunday’s Goldikova Stakes. A gutty gate to wire winner of the John C. Mabee Stakes (G2), Raymundos Secret should relish the cutback in distance, as she’s won four out of her five starts at a flat mile. Second in the Rodeo Drive (G1) on Sept. 26, Maxim Rate has three wins from six tries at one mile on grass and will be ridden by Umberto Rispoli, who guided her to a pair of wins this past summer at Del Mar.