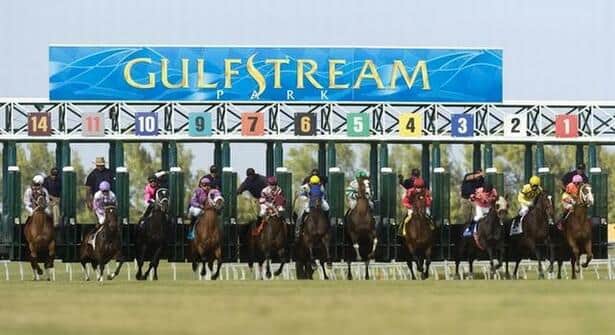 Throughout the year, the NTRA will provide a guide to the best stakes races in North America and beyond. Races are listed in chronological order (all times Eastern). Entries can be found through the link for each race.

A pair of Kentucky Derby qualifying races are on tap this weekend. The 1 1/16-miles, Grade 3 Holy Bull Stakes will headline a 12-race program at Gulfstream Park with five graded stakes worth $600,000 in purses while Santa Anita Park hosts the Robert B. Lewis Stakes (G3). Both preps offer qualifying points for the 147th Derby on May 1 to the top four finishers on a 10-4-2-1 scale.

Turf stakes winners Kentucky Pharoah, unbeaten since being moved to the grass last month, and Never Surprised, undefeated in his only two starts last fall, will provide an intriguing matchup when they square off in Saturday’s $100,000 Kitten’s Joy. Calumet Farm homebred Kentucky Pharoah made his first two starts on dirt in Kentucky, finishing off the board in a pair of maiden special weights behind Mandaloun, a next-out winner that ran third in the Lecomte (G3) on Jan. 16, and Caddo River, winner of the Smarty Jones Jan. 22. Never Surprised hasn’t raced since opening his career with back-to-back starts 20 days apart in November on the Aqueduct turf. After winning a six-furlong maiden special weight in 1:09.19, he came back with a front-running 1 ¾-length score in the Central Park.

Graded stakes action kicks off at Aqueduct Racetrack for 2021 with a field of five assembling for Saturday's 128th running of the Toboggan for 4-year-olds and upward going seven furlongs over the main track. Trained by Rudy Rodriguez for owner Michael Dubb, the 8-year-old Pete's Play Call was claimed for $62,500 out of a winning effort in an optional-claiming sprint on Nov. 27 at the Big A. He made first start for new connections a winning one when capturing the 6 1/2-furlong Gravesend last out on Jan. 2 at Aqueduct.

Slam Dunk Racing’s Drain the Clock will make his graded-stakes debut in the Swale Stakes for connections who are hoping to keep things short and sweet. Although also nominated to the Holy Bull, the 1 1/16-miles Florida Derby prep, Drain the Clock will seek to remain undefeated in South Florida in the seven-furlong undercard feature for 3-year-olds. Drain the Clock captured his Sept. 12 debut in a five-furlong off-the-turn maiden special weight race at Gulfstream before winning a first-level optional claiming allowance at six furlongs at Gulfstream Park West Oct. 28.

John Minchello’s Competitive Speed, a bargain $5,000 juvenile purchase turned stakes winner in less than a year, will put her three-race win streak on the line when she tries graded company for the first time in Saturday’s $100,000 Forward Gal. Competitive Speed debuted in the slop at Gulfstream Park West in October, finishing sixth in a six-furlong maiden special weight, but hasn’t lost since. She graduated by 1 ½ lengths in a 6 ½-furlong maiden claimer at Gulfstream West less than two weeks after her unveiling and made her Gulfstream debut Dec. 6, coming from off the pace to take a starter optional claimer by 4 ½ lengths before stepping up to stakes company in the 6 ½-furlong Glitter Woman Jan. 2.

Con Lima, who stepped up and stretched out to become a stakes winner last month, goes after a third straight victory in Saturday’s $100,000 Sweetest Chant. Con Lima comes from the barn of Todd Pletcher, who also trained her sire, 2014 Florida Derby winner Constitution. Already, Con Lima has six races under her belt with three wins and three seconds. Her first four starts came on dirt, including a pair of runner-up finishes in the P.G. Johnson at Saratoga and Our Dear Peggy at Gulfstream in September, both of which were rained off the grass.

WinStar Farm LLC and CHC Inc.’s Prime Factor and Repole Stable and St. Elias Stable’s Amount are scheduled to bring a combined total of two races of experience into Saturday’s $200,000 Holy Bull Stakes. Jumping from maiden special weight company into a graded-stakes may be a lot to ask of lightly raced 3-year-olds, but their trainer, Todd Pletcher, has a history of success with late-developing colts during the winter months at Gulfstream. Prime Factor debuted at Gulfstream Dec. 12 with a stunning 8 ¼-length victory, running six furlongs in 1:10.38 while drawing away powerfully after closely stalking the early pace. Amount overcame bumping at the starts of his Dec. 26 debut, rallying from off the pace to score by 5 ¾ lengths, completing seven furlongs in 1:24.68.

The Richard Baltas-trained Idol, Richard Mandella’s Tizamagician and Florida invader King Guillermo head a compact field of five older horses in Saturday’s San Pasqual Stakes. Idol was attentive to the pace en route to a close second place finish in the San Antonio Stakes (G2) here on December 26 and will once again get the services of eastern-based Gabriel Saez on Saturday. With an overall mark of 13-3-5-0, Tizamagician comes off an outstanding second condition allowance win on Jan. 2, a race in which he led throughout and took by a half length. Although he’ll be facing a graded stakes winner in King Guillermo, Tizamagician has the advantage of a sharp recent win over the track as he once again runs out of his own stall for Mandella.

Although Bob Baffert will be packing a heavy one-two punch with Spielberg and Medina Spirit, Saturday’s Robert B. Lewis Stakes has attracted a very competitive field of eight sophomores, with no clear-cut standout. Spielberg comes off a gutty nose victory at the same distance in the Los Alamitos Futurity (G2) on Dec. 19, which was his sixth career start. The win no doubt took on added luster when the runner-up, Doug O’Neill’s The Great One, came back to demolish a field of maidens by 14 lengths this past Saturday.

Defending race winner Lady Apple headlines the ninth running of the Ladies Classic, contested at 1 1/16-miles on the main track. The 5-year-old daughter of Curlin is trained by Hall of Fame conditioner Steve Asmussen and has won six of her 18 starts with earnings of $1,045,984. One year ago, Lady Apple closed gamely to defeating a contentious field which included 2019 Kentucky Oaks winner Serengeti Empress and Street Band. Her third place finish in last month’s Spanky Broussard at Fair Grounds served as a solid prep for her return to Sam Houston Race Park, where she will break from post position four.

Trainer Mike Maker has won seven of the past nine editions of the John B. Connally Turf Cup and has three turf specialists set to compete in Sunday’s test. One of his prospects this year, Three Diamonds Farm’s Marzo, ran third in last year’s edition of the race before running in the Sword Dancer (G1) at Saratoga. Sired by Medaglia D’ Oro, Marzo has won four races and $310,000 to date. He will break from post six with Albin Jimenez in the saddle.