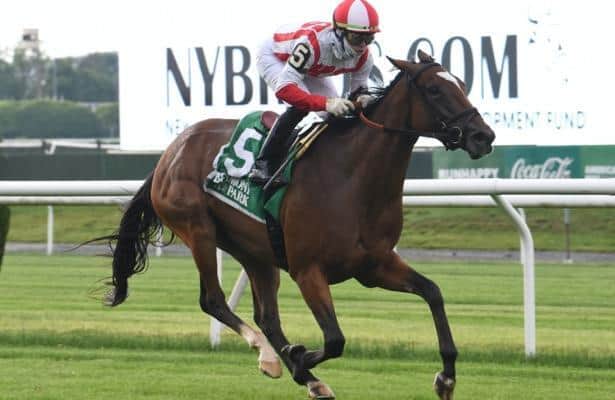 Throughout the year, the NTRA will provide a guide to the best stakes races in North America and beyond.

Races are listed in chronological order (all times Eastern). Full previews when available can be found through the link for each race.

The Grade 2 Stephen Foster is the headliner of a stakes quartet on Saturday’s 11-race program at Churchill Downs, while the Grade 1 Just a Game, featuring the seasonal bow of champion Uni, is one of four graded stakes on the Belmont Park lineup.

The Stephen Foster will be broadcast on NBC as part of the Breeders’ Cup Challenge Series. The one-hour broadcast, which will begin at 5 p.m., also will include the Grade 2 Fleur de Lis Handicap.

America's Day at the Races, produced by the New York Racing Association (NYRA) in partnership with FOX Sports, will air through Sunday on FS1, FS2 and MSG+.

Also featured on Saturday's broadcast is the Grade 3 Ohio Derby at Thistledown Racecourse for 3-year-olds going 1 1/8 miles, which has been added to the "Road to the Kentucky Derby" series.

The top-four finishers will receive points worth 20-8-4-2 for entry to the field for the Kentucky Derby, rescheduled for September 5 due to the COVID-19 pandemic.

Reigning 2-year-old champion male Storm the Court seeks his first victory since taking the 2019 Breeders’ Cup Juvenile when he starts in the Ohio Derby against 14 challengers. Trained by Peter Eurton, Storm the Court is winless in three starts this season including his most recent run, a sixth-place effort in the Grade 1 Arkansas Derby. The son of Court Vision captured the Breeders’ Cup Juvenile last November at Santa Anita Park en route to earning the Eclipse Award for divisional honors.

Blue Devil Racing Stable's Grade 1-winner Come Dancing will look to rebound after a rare off-the-board performance last out when she headlines the Grade 3 Vagrancy Handicap. Trained by Carlos Martin, Come Dancing finished 12th in the Grade 1 Apple Blossom going 1 1/16-miles at Oaklawn Park. The daughter of Malibu Moon now returns to sprinting, where she excelled in 2019, highlighted by a dramatic come-from-behind win in the Grade 1 Ballerina in August at Saratoga Race Course.

Malakeh, a 5-year-old daughter of Harbour Watch, goes after her third straight score in Saturday’s Nassau Stakes. Bred by Gestut Gorlsdorf, the bay mare will make her first start in Canada when she goes postward in the one-mile E.P. Taylor Turf Course engagement that has drawn seven hopefuls. After a polished performance to close the curtain on her 2019 campaign last August at Saratoga, Malakeh opened up this season with another win, a gutsy neck score over firm going at Churchill Downs on May 22.


*Rating is based on HRN fan votes, which rank the Top Active Horses in training.

Stonestreet Stables’ eye-popping 8 3/4-length maiden winner Cazadero leads a field of seven promising 2-year-olds in search of graded stakes glory in Saturday’s 119th running of the Bashford Manor. Cazadero, trained by Hall of Famer Steve Asmussen, dazzled in his debut on May 29 at Churchill Downs under Ricardo Santana Jr. Cazadero, a 2-year-old homebred son of Street Sense, sported an impressive work tab entering his maiden race which included a swift half-mile move in :46.40 from the gate at Keeneland. Since his debut, Cazadero has been stabled with Asmussen’s string at Churchill Downs.

Trainer Graham Motion will saddle a pair of graded stakes winners as part of a seven-horse field of older fillies and mares in the New York Stakes going at 1 ¼ miles on Belmont Park's inner turf. Among Motion's trainees is Alex G. Campbell, Jr.'s Mean Mary, who has started her 4-year-old campaign with consecutive graded stakes wins in front-running fashion. The Kentucky homebred went gate-to-wire to win the 1 ½-mile Grade 3 La Prevoyante in January over the Gulfstream Park turf and followed with another winning effort on the course by leading a 12-horse field through every point of call in the Grade 3 Orchid on March 28.

Serengeti Empress, winner of the 2019 Kentucky Oaks, is ready for her showdown versus champion Midnight Bisou, the No. 1-ranked horse in the latest NTRA Top Thoroughbred Poll, in the Fleur de Lis Handicap – a Breeders’ Cup “Win and You’re In Distaff Division” race. The speedy Serengeti Empress led every step of the way in last year’s Kentucky Oaks and was a convincing 6 ¼-length winner of the Grade 2 Azeri Stakes at Oaklawn Park March 14. Midnight Bisou, trained by Hall of Fame conditioner Steve Asmussen, has been nothing short of spectacular throughout her 20-race career. The now 5-year-old mare won seven straight graded stakes last year en route to earning the Eclipse Award for champion older dirt female and began her 2020 campaign by running second against males in the $20 million Saudi Cup on Feb. 29.

Robert Baron and WinStar Farm's Grade 1-winner Promises Fulfilled returns off a more than eight month layoff to headline the True North Stakes going 6 ½-furlongs. Promises Fulfilled, who will ship up to New York from Kentucky, has trained forwardly at Churchill Downs, including a bullet five-eighths breeze in 59 seconds flat on June 13 and a similarly speedy effort in 59.20 Saturday on the Churchill Downs main track. He sizzled to a front-running score in the 2018 Grade 1 H. Allen Jerkens at Saratoga Race Course and boasts a record of 17-7-0-3 with purse earnings of $1,455,530.

Another top older horse that entered the Stephen Foster is last year’s Grade 2 Louisiana Derby hero By My Standards. Trained by Bret Calhoun, By My Standards returned as a 4-year-old in February at Fair Grounds with a convincing three-length victory in the Grade 3 New Orleans and he enters the Stephen Foster following a 1 ¾-length win in last month’s Grade 2 Oaklawn Stakes.

Trainer Chad Brown will bring a strong hand of cards to the table when he saddles turf champion Uni, Grade 1-winner Newspaperofrecord, and two-time graded stakes winner Regal Glory while in pursuit of a fourth consecutive win in the 27th running of Saturday's Grade 1 Just a Game over the Widener turf course.

Uni, the reigning champion turf female, will make her 2020 debut in the Just a Game, having not raced since taking last year's Grade 1 Breeders' Cup Mile at Santa Anita Park, where she became the sixth female to score a win in the race. Newspaperofrecord arrives at the Just a Game off a wire-to-wire victory in the Grade 3 Intercontinental on June 6 over the Widener turf, where she recorded swift fractions but still had enough left in the tank to draw off to a four-length victory.

Godolphin’s two-time stakes-winning filly Micheline will be in search of her first graded stakes victory in Saturday’s 51st running of the Regret Stakes, a 1 1/8-mile turf event for 3-year-old fillies. Micheline, trained by Mike Stidham and ridden by Joe Bravo, scored a 2 ¼-length victory in last month’s $75,000 Honey Ryder Stakes at Gulfstream Park. The 3-year-old filly by Bernardini broke her maiden in her second-career start last year in the $106,000 Sorority Stakes at Monmouth.