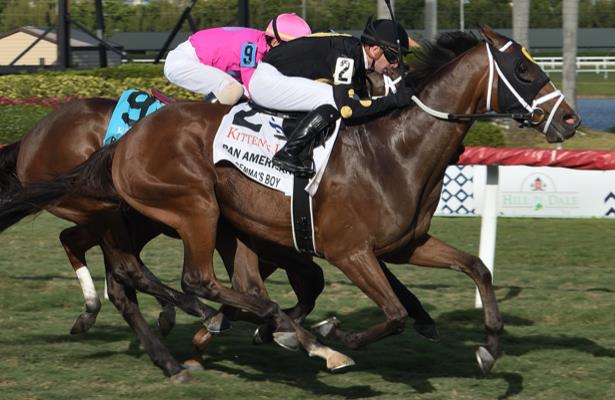 Having entered 2-for-2 this season, with both victories over the surface, Zulu Alpha ran wide around all three turns. The 7-year-old Street Cry gelding made a strong middle move into the last bend, advancing from next to last in a field of nine to challenge for the lead.

It all culminated in Zulu Alpha coming up just short in a three-way photo finish.

"I got a great trip, honestly,” Geroux said. “I drew a nice post. I was able to sit third on the inside saving a lot of ground."

A 5-year-old Into Mischief gelding, the Kentucky-bred Bemma’s Boy is campaigned by Paradise Farms Corp. Similar to Zulu Alpha, he spent time in the claiming ranks before becoming a graded stakes winner.

Bemma’s Boy moved into Maker’s care from the barn of Bentley Combs following a sixth-place effort in a claiming race last May at Churchill Downs. The gelding won two of his following four starts for his new trainer, including an allowance event last October at Keeneland that vaulted him into stakes company.

The gelding finished his 4-year-old season with a fourth last November in Churchill’s River City Handicap (G3). He then began his 5-year-old season Jan. 26 at Sam Houston with a runner-up effort in the John B. Connally Turf Cup Stakes (G3) before making the grade Saturday in the Pan American.

Zulu Alpha, the beaten favorite, entered as the early 2020 leader in the Older Male Turf division. He made his Grade 1 breakthrough Jan. 25 in Gulfstream’s Pegasus World Cup Turf Invitational Stakes, then claimed the track’s Mac Diarmada Stakes (G2) on Feb. 29 for a second straight season.