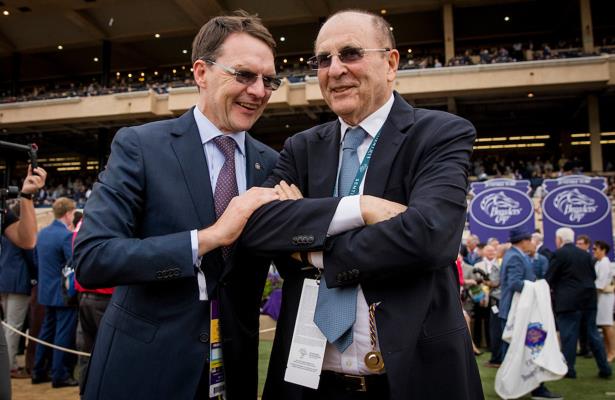 Trainer Aidan O’Brien, who conditions some of the world’s top horses out of his Ballydoyle stable in Ireland, recently received in his care St Patrick’s Day, the full brother to 2015 Triple Crown winner American Pharoah.

Racing UK caught up with O’Brien, who said he began working with St Patrick’s Day a month ago.

“We think and hope that he'll be a Royal Ascot horse and he'll have a run or two before,” O’Brien told Racing UK. “It could be the Jersey or the St James's Palace, that's what we are thinking."

The Group 1 St. James’s Palace Stakes is scheduled for June 20 and is almost a mile over Ascot’s turf. The Group 3 Jersey Stakes, scheduled for the next day, is seven straight furlongs over the turf.

“I'm dreaming at the moment what he could be,” O'Brien added. “He only had two runs in America, placed the first time and won the second.”

St Patrick’s Day made two starts for trainer Bob Baffert during the Del Mar meet. In his debut he finished second to stablemate Zatter, who is owned by Zayat Stables, the same owners who campaigned American Pharoah. In his next start, St Patrick’s Day held off Instilled Regard, the eventual Grade 3 LeComte winner, by half a length.

St Patrick's Day has not raced since breaking his maiden. Coolmore reported last month that he had been rehabbing from a tendon injury.