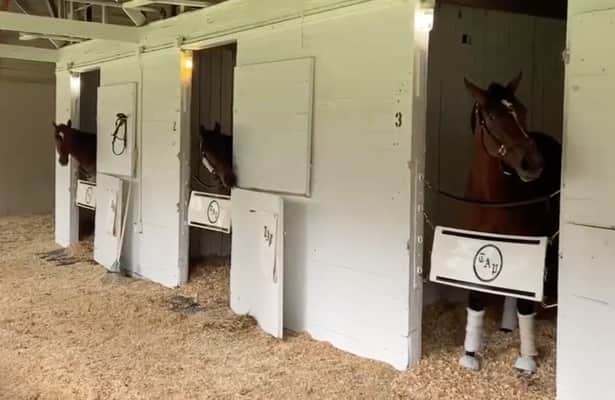 For many horse-racing fans and Louisville residents, nothing says spring like preparations at Churchill Downs to welcome back horses, their entourages and, in late April, fans for opening week and the Kentucky Derby.

The big news Sunday was that trainer Todd Pletcher's contenders were arriving at the track.

It feels more like Derby Season now that the #ToddSquad has arrived at @ChurchillDowns. Jeff Ruby Steaks runner-up Sainthood was among the first of his #KyDerby contenders on the grounds. pic.twitter.com/oYTDVGpGIr

Here are more views of the goings-on from the Twitterverse.

Three weeks out from the @KentuckyDerby, Mandaloun (pictured) breezed five furlongs in :58.80 and Helium clipped five-eighths of a mile in :59.20 over a fast track Saturday morning @ChurchillDowns.

Essential Quality returned to the track Wednesday at @ChurchillDowns for the first time since his Blue Grass win. #KyDerby pic.twitter.com/IehamPGN05

The big news on Monday was the arrival of undefeated champ Essential Quality.

Essential Quality is back @ChurchillDowns! He reports it’s good to be back?? pic.twitter.com/ayzk0F2KJE

?? Views from the backside. ?? pic.twitter.com/nTkafL5lkO

As of Monday afternoon, the following @KentuckyDerby and Oaks contenders are stabled on the grounds:

Kevin Kerstein, publicity manager for Churchill Downs, posted this video showing the changing of a sign to reflect Derby 2021.

It’s another sign that @KentuckyDerby 147 is just around the corner. #KyDerby pic.twitter.com/qlsQiFR2KR

Now its real! 2020 is behind us and It's DERBY TIME!!!! @KentuckyDerby @ChurchillDowns @HorseRacingKK @DerbyMedia Such a site to see. #WLKY pic.twitter.com/Be3JDjnwJ7

The Kentucky Horsemen's Benevolent and Protective Association also got in on the act, posting these photos from March 16, when Churchill Downs welcomed the first horses of the season.

And here's a look at a horse taking to the track, posted by the Kentucky Derby Museum.

Horses are back on the track! Kentucky Derby Museum is the exclusive provider for tours of @ChurchillDowns. Come join us on an early morning tour to catch a morning workout! ??

Not too shabby. Sharper than some years, not as slick as others. Either way, I look forward to eventually ending up with 17 of 'em. pic.twitter.com/1w8DKpks26

It was 72 degrees and (kind of) sunny in Louisville Tuesday. But if you needed another sign that spring is around the corner, how about the arrival of the first horses at Churchill Downs?

Kevin Kerstein, the track's director of publicity, was as excited as any race fan, tweeting Tuesday morning:

The waiting is the hardest part. pic.twitter.com/lFAU4zal5n

He followed that up with a tease:

We are hours away from the first van coming through the Stable Gate @ChurchillDowns. For those inquiring minds, Greg Foley (@Foley_Racing) is annually the heavy favorite to arrive first. However, it appears we have an upset in the making this year from @NormCasse. Stay tuned...

The first sign of spring in Louisville - horses have returned to @ChurchillDowns. Trainer @NormCasse was the first on the grounds. Welcome back! pic.twitter.com/sQBfaVSwYN

Trainer Norm Casse said he will have 20 horses at the historic track eventually but that he sent five on Tuesday.

"Those are the horses that aren't going to run back at the Fair Grounds, and I just felt like it would be best to get them out of there already and get them acclimated at Churchill," Casse said.

"To me, it's easier to stagger your exit and your arrival than doing it all at once. I have enough manpower to do that, so we're doing it that way."

The first van arrived just after 9 a.m. from New Orleans, Kerstein said in an email.

"A lot of horses annually start arriving after this weekend’s races at Fair Grounds, so I’d expect a number of horses to ship over the weekend and into early next week."

"We’re thrilled to welcome back all of the horses, their trainers and staff after the winter season," Kerstein said. "It’s a true sign that Derby is just around the corner once the backstretch opens."

Opening night for the Spring Meet is Saturday, April 24, and the Kentucky Derby is a week later, on May 1. The last day of the meet is June 26.

Casse could have been speaking for many when he said, "We're all excited to be back."