Microshares in Max Player offered ahead of Preakness run 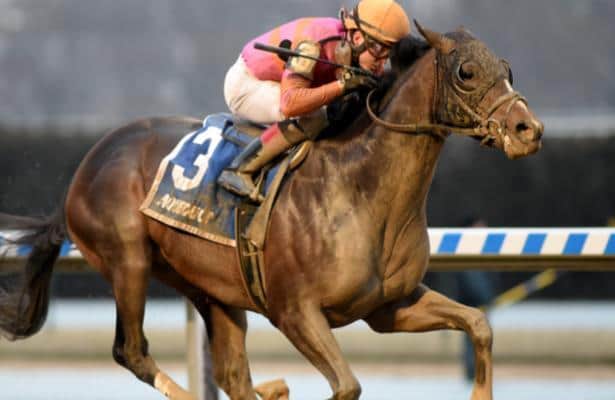 SportBLX, through its Annestes Thoroughbreds stable, is offering another chance to own a piece of Max Player ahead of his appearance in this weekend's Preakness Stakes.

The offer from Sport BLX is for shares in Annestes Thoroughbreds, which owns 3.0 percent of Max Player as part of its portfolio of homebred racehorses. Also included are Swingman, an emerging 2-year-old by Tonalist, and a weanling named Midnight Lute out of an A.P. Indy mare who will go to the sale next year. Shares will be offered at $110, with a two-share minimum investment, and proceeds will be used to buy more shares in Max Player and Swingman, according to a company spokesperson.

SportBLX Thoroughbreds owns 21 percent of Max Player on behalf of more than 500 fractional owners. It is no longer open for investment. SportBLX executive chairman George E. Hall owns the remainder of the Honor Code colt.

Max Player, trained by Steve Asmussen, has two wins in six career starts. He was fifth in the Kentucky Derby and third in the Belmont Stakes. In his first start this year, he won the Grade 3 Withers Stakes at Aqueduct.

"Offering shares in Max Player, and allowing so many people who love the race game like myself a chance at ownership, has been one of best decision I’ve ever been a part of. I’m grateful to have a horse like Max Player but the experience of owning a horse that competes at this level is only heightened by what we’re doing at SportBLX," Hall said in the release.

SportBLX said in the release that it also will offer shares in multiple "2-year-olds with strong breeding as well as a newly created pinhooking company."