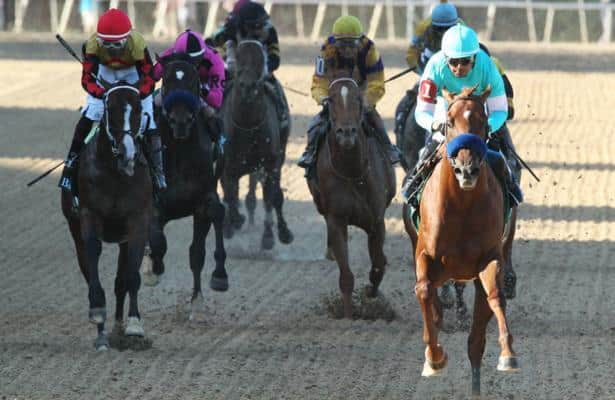 In a development that could impact the upcoming Triple Crown series, two samples producing positive tests for a banned substance on Arkansas Derby day will be sent soon for confirmation by an independent lab.

Bernie Hettel, Arkansas’ state steward, said Tuesday that by law he cannot yet divulge which horses tested positive on May 2, nor can he share the substance in question.

Trainers whose horses test positive select a referee lab to analyze the split sample. Hettel said “it’s a particularly bad time to be going through this for anybody” because coronavirus protocols could slow the process.

“I can’t do anything until I get that back, and then we’ll proceed per rules from that point on,” Hettel said.

Among the highlights from the card, Bob Baffert-trained Charlatan and Nadal swept split divisions of the Arkansas Derby (G1). Winners aren’t the only horses, however, subject to tests, as stewards by Arkansas regulations can randomly order post-race samples from any runner.

According to a report by The Courier-Journal's Tim Sullivan, citing an anonymous source, Baffert had two positives during the Oaklawn meet, including one but not both of his Arkansas Derby winners. The barn's other runner on the card was Gamine, a $1.8 million 3-year-old filly who improved to 2-for-2 when winning a first-level allowance race.

The Daily Racing Form reports the Arkansas Derby positive as Charlatan. Should the split return with the same result, he stands to be disqualified and runner-up Basin declared the winner. A negative split leaves the running order as is.

In a statement to Horse Racing Nation, Baffert said Tuesday: "The rules of the Arkansas Racing Commission mandate confidentiality concerning any investigation into an alleged rule violation until there is a written decision of the Stewards. I am extremely disappointed that, in this instance, the Commission has not followed its own rules on confidentiality.

"I am hoping for an expedited investigation and look forward to being able to speak soon about any written decision of the Stewards, if and when it becomes necessary and I’m allowed to under the Commission’s confidentiality rules.”

Baffert has put both Nadal and Charlatan under consideration for the June 20 Belmont Stakes. Since the Arkansas Derby, unbeaten Nadal returned to the work tab last Wednesday at Santa Anita Park, breezing a bullet half mile. Charlatan, another undefeated colt, has yet to record a timed drill following his victory.

Should Charlatan lose his Arkansas Derby victory and its earnings, he'd be left with money from a maiden and allowance win at Santa Anita Park. But if the Belmont Stakes attracts beyond 16 entries, three spots in the gate are to be determined by a committee, ensuring based on his talents the colt would be included.

Gamine, meanwhile, is a candidate for the June 6 Santa Anita Oaks (G2) and June 20 Acorn Stakes (G1) at Belmont Park.