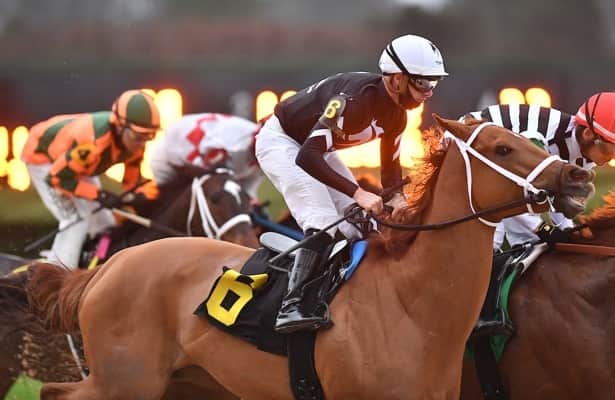 Heavily bet to a 1-5 favorite in the slop at Oaklawn Park, Monomoy Girl began her 6-year-old season by delivering her sixth consecutive victory. She finished first by two lengths in the 29th running of the $250,000 Bayakoa Stakes (G3) for older fillies and mares.

As he has for every race after Monomoy Girl’s debut, Florent Géroux rode her Sunday for 2020 training champion Brad Cox. This time he took her wide around both turns. With one flick of the crop midway through the final turn, she moved quickly from third to first.

“As soon as I gave her a tap to remind for her to go on, right away she took over,” Géroux told FS1. “It took like three jumps. She switched leads beautifully and just kept on going.”

Our Super Freak (15-1) finished second. Early pacesetter Finite (7-2), a three-time graded-stakes winner, was another 1 1/4 lengths behind in third. It was another three-quarters of a length back to Chance to Shine (38-1), who finished fourth in the field of six.

Asked by TVG how he felt right after the race, Cox said, “Relief. It was a big performance. I was happy with how she ran.”

“We didn’t go very fast,” Géroux said. “It looked like the two horses in front of me got away from me for a couple strides.”

For a moment or two on the backstretch, there might have been a doubt about whether Monomoy Girl would show any interest in working for her third win in as many starts on wet tracks. She dispelled that in the final turn, and Géroux was not surprised.

“The trick with her is not trying to make the lead too soon,” Géroux said. “She’s so good she’s kind of like going over those horses pretty easily. For the most part it’s trying to keep her busy to the wire.”

“She came under a little bit of a drive right before the quarter pole,” Cox said. “Considering the circumstances with the track and kind of a slow pace and being hung wide, she ran on well.”

Cox called the win “a great building block for the Apple Blossom.” The $1 million Grade 1 handicap is April 17 at Oaklawn.

Colic and a pulled hind muscle cost Monomoy Girl 18 months of races between the fall of 2018 and the spring of 2020. With Cox bringing her back for an ownership group led by Michael Dubb, she was able to book-end the layoff with championship seasons, first as the top 3-year-old filly and then last year as the best older female.

The night after her second Breeders’ Cup Distaff victory, Monomoy Girl was sold last November for $9.5 million to Spendthrift Farm, which sent her right back to Cox to race as a 6-year-old. Spendthrift also leased minority ownerships to Sol Kumin’s Madaket Stables and to MyRacehorse.com, which announced last week it was selling 10,200 micro-shares for $46 each.

If not for a disqualification to second place in the 2018 Cotillion (G1) at Parx Racing, Monomoy Girl would have a 12-race winning streak. As it is, she has 14 wins from 16 starts with earnings of $4,576,818. Her two seconds include the disqualification and an upset loss to Road to Victory in the 2017 Golden Rod (G2) at Churchill Downs, the only time she did not finish a race crossing first.

In a career that includes seven Grade 1 wins and two at the Grade 2 level, it was the first time Monomoy Girl had started a Grade 3 race. She has also won a black-type stakes, two allowance races and a maiden special weight.

“It’s been a fairy tale,” Géroux said. “I think it’s the dream of every jockey in the world to be aboard this kind of champion.”