Spinster, Pat O'Brien among next options for Vexatious and Lexitonian 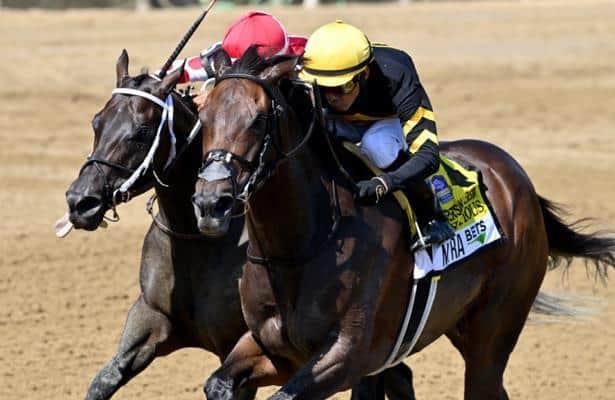 Trainer Jack Sisterson nearly went from zero career Grade 1 victories to two in a span of hours. Following Vexatious' thrilling win over Midnight Bisou in the Personal Ensign at Saratoga, Lexitonian flew from the clouds to just miss capturing the Bing Crosby at Del Mar.

Despite huge efforts from both horses, Sisterson said they are no worse for the wear.

"They both came out of their races in great shape. Both are happy, healthy and eating very well."

While Vexatious sat a beautiful trip in her victory, Lexitonian had anything but an easy trip in the Crosby.

"He was up against it after breaking slow, but the fast factions worked in his favor. He was really picking them up and putting them down late, but unfortunately the wire came up just too soon," said Sisterson.

Sisterson seems confident that the best is yet to come for the improving 4-year-old son of Speightstown.

"Speightstowns improve with age. I mismanaged him a bit as a 3-year-old, trying synthetic and turf, but now we have him doing what he wants to do, sprinting on the dirt."

While Sisterson noted that "nothing is set in stone," he laid out a game plan for each runner.

"With Vexatious taking a Breeders' Cup Win and You're In race, the Distaff has become the ultimate goal. The Beldame is possible, but she would be running in the Spinster at Keeneland next if I had to pick a race now."

Sisterson said Lexitonian likely will make two starts before running in the Breeders' Cup Sprint if all goes to plan.

"The Pat O'Brien or the Forego would be his next start if he runs twice before the Breeders' Cup Sprint. The Phoenix, over the same track as the Breeders' Cup, will likely be his final prep."

The humble trainer could not help but give all the praise to his hard-working staff after his huge day.

"Winning a Grade 1 means a lot, but I can not do it without the staff behind me. The credit goes to my staff. It is unfortunate that it just reads my name in the program when hundreds of people behind the scenes help out."

Sisterson is just happy to have the horses to be able compete in top-quality races.

"It was great to be able to just compete in these races. It has long been a dream of mine to run in them, never mind win them. Great day to share with the team."

With his star quickly on the rise and a thriving relationship with Calumet Farm, this is likely just the beginning of Sisterson's Grade 1 success.