Spielberg gets up late to give Baffert another Futurity win 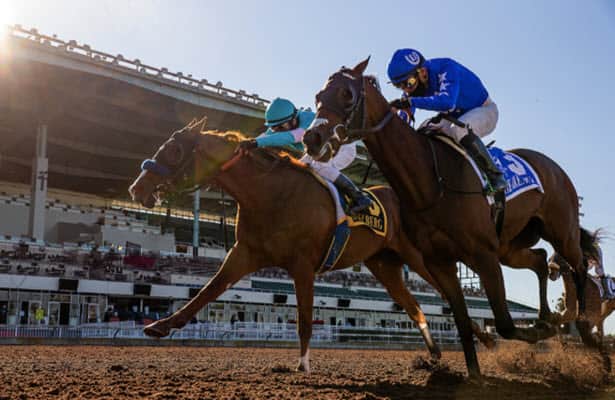 Spielberg needed every last inch of the long stretch at Los Alamitos to run down pacesetting longshot The Great One and provide trainer Bob Baffert with yet another win in the Grade 2, $200,000 Los Alamitos Futurity at Los Alamitos Race Course on Saturday.

Sent off the 9/5 second choice in a six-horse field, Spielberg and new rider Flavien Prat stalked The Great One through fractions of 23.01 and 47.76 for the opening half mile. The Great One -- a maiden ridden by Abel Cedillo, who had been aboard Spielberg in his two previous starts -- shook loose of the field on the second turn and looked poised to score as the longest shot in the field.

However, steadily making up ground on the outside came Spielberg, who with one final surge in the final 100 yards managed to get a nose down on the wire and provide Baffert with a seventh straight Futurity win and 13th overall. The Great One, a son of Kentucky Derby winner Nyquist, was followed across the wire by Petruchio and Red Flag, the 3-5 favorite who was never a factor.

“I’d never ridden him before, but Bob told me he was doing great," Prat said. "The outside was a good draw for him. He broke well and was able to relax. I thought we had it all the way down the stretch but it was close.’’

In a tight finish, SPIELBERG gets the victory in the G1 Los Al Futurity giving Trainer @BobBaffert his 13th win in this race! Congrats to all connections rider Flavien Prat & Owners @StarlightRacing, SF Racing LLC, et. all. pic.twitter.com/7FL4ReVaqT

“That horse (runner-up The Great One) was tough to get by," Baffert said. "We needed every bit of that stretch and we were fortunate to get there."

A $1 million auction purchase as a yearling, Spielberg was twice Grade 1 -placed (Del Mar Futurity, American Pharoah) before finally earning his diploma against maidens in start No. 4 on Nov. 1 at Del Mar. The son of Union Rags out of the Smart Strike mare Miss Squeal came back to finish fourth behind winner Red Flag in the Bob Hope (G3) at Del Mar on Nov. 15.

"I didn’t know if I was going to run him here and I didn’t decide until after he worked well this week (six furlongs in 1:13 2/5 Dec. 13 at Santa Anita)," Baffert said. "I knew he was going to run well because he had shipped well over here and he was really on it in the paddock. I’m just happy for everybody in the ownership group."

"Now we can start thinking (Kentucky) Derby," Baffert added. "It starts here for us."