Spielberg returns a winner in 1st start since the Florida Derby 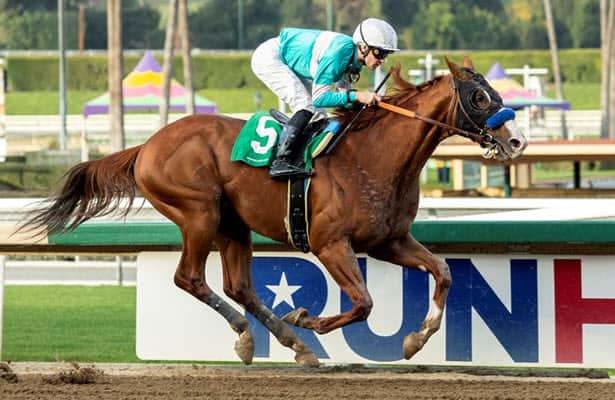 With his well fancied stablemate Classier duking it out on the front end with second choice Vittorio, Bob Baffert’s Spielberg, idle since well beaten in the Florida Derby (G1) March 27, was more than happy to pounce on the tiring duo a quarter mile from home and he promptly waltzed to a three length score in Friday’s $72,000 allowance feature at Santa Anita.

Ridden by Flavien Prat, Spielberg, a 4-year-old colt by Union Rags, got a flat mile in 1:38.89 registering his third win from 10 lifetime starts.

“We gave him plenty of time and unfortunately the other horse didn’t run well,” said Baffert. “I just told Flavien to sit back there and let him run his race. We gave him some time off, he’s filled out and we’ll stay here with him.  Something like the Big ’Cap (Santa Anita Handicap, Grade 1 on March 5) would be more like it.  He won’t be shipping anywhere, he’ll stay here.”

A comfortable third, about six lengths off the leaders heading up the backside, Prat began asking Spielberg to close in at the 3 ½ furlong pole and turning for home he had a length on Vittorio as Classier dropped back readily.

Owned by Golconda Stables, Madaket Stables, LLC, SF Racing, LLC, Siena Farm, LLC, Starlight Racing and Robert Masterson, Spielberg, who is out of the Smart Strike mare Miss Squeal, fetched $1 million as a Keenland September Yearling.  With today’s winner’s share of $43,200, he increased his earnings to $463,700 and improved his overall mark to 10-3-3-1.

Classier, with John Velazquez up, was eased through the lane and finished a distant last as the   4-5 favorite.