Spiced Perfection wears down Amy's Challenge to win the Madison 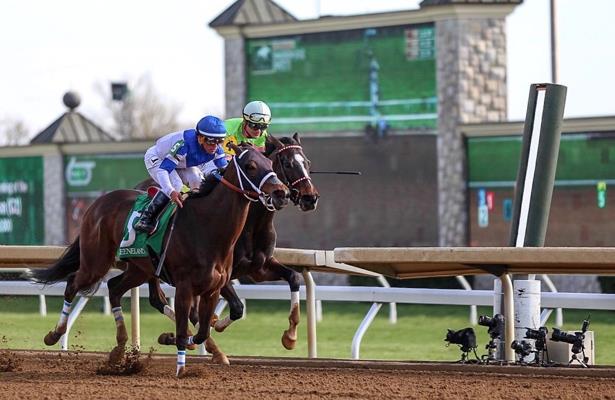 A duel between out of state shippers highlighted Saturday’s Grade 1, $300,000 Madison Stakes, with Spiced Perfection the winner of a back-and-forth battle with Amy’s Challenge at Keeneland.

Spiced Perfection, the California-bred who bases at Santa Anita Park, won her second Grade 1 race in three starts -- she also took the La Brea (G1) back on Dec. 26 -- with a pace stalking trip going seven furlongs.

“To win for these owners with this filly, it means a lot to me, and to win here at Keeneland," said Peter Miller, who trains for Pantofel Stable, Wachtel Stable and Peter Deutsch. "Great ride by Javier (Castellano), and I’m happy for the whole team. She ran great, she deserved it.

The 4-year-old by Smiling Tiger finished up seven furlongs in 1:23.49, just ahead of Amy’s Challenge, who appeared to twice re-rally in the stretch only to come up just short in the end.

Amy’s Challenge, who came in from Arkansas’ Oaklawn Park, set the early fractions, going in 22.56 and 45.53 in a field that also included East Coast star/third-place finisher Late Night Pow Wow and champion Shamrock Rose, who missed the board.

In the end, it was just between Spiced Perfection and Amy’s Challenge for the win on the Blue Grass Stakes (G2) undercard.

Miller said he could point to the Humana Distaff (G1) on Kentucky Derby weekend next.