Spiced Perfection back with authority to win the Go for Wand 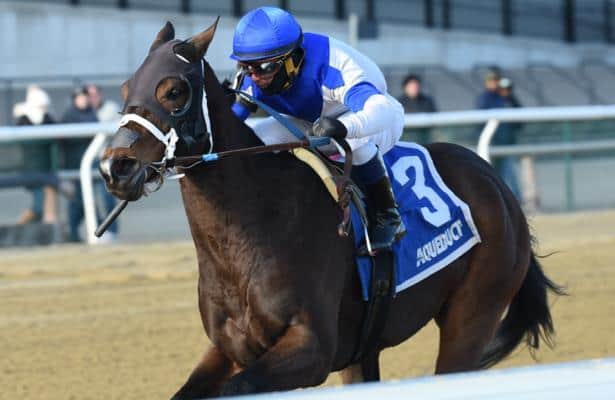 The connections of Spiced Perfection saw plenty of value in returning the California-bred to the races next season at age 5, to the point that a $1.35 million bid at the Keeneland November Sale didn’t meet reserve.

The daughter of Smiling Tiger proved there’s plenty left in the tank Saturday in a gate-to-wire victory in Aqueduct’s Grade 3, $250,000 Go for Wand Handicap.

"We thought she was the best coming in," said Adam Wachtel, who campaigns the filly with Pantofel Stable and Peter Deutsch. "We were a little concerned about the distance; she hadn't run a mile in a while. We were concerned about the weight. She was spotting the other fillies an awful lot of weight."

But n Spiced Perfection’s first start since a fourth in the Nov. 2 Breeders’ Cup Filly & Mare Sprint, she broke on top and jetted out to a two-length lead under jockey Javier Castellano. Having kicked through the first quarter mile in 24.74 seconds, Spiced Perfection kept going with a half mile in 49.09, at which point Saguaro Row was only a neck back.

Once at the top of the lane, Castellano asked Spiced Perfection, and he needed only a hand ride from there as they completed the mile in 1:39.11.

"I thought Javier did a brilliant job of keeping the early fractions on the slower side, so she would have plenty left in the tank," Wachtel said. "She's just a classy filly that gives her all every time."

Saguaro Row was second, 2 1/4 lengths back, while Our Super Nova held on for third in the field of six fillies 3 years old and up.

Castellano said he spoke Saturday with Spiced Perfection's trainer, Peter Miller, and the two agreed that there was little speed signed on for this race.

“Basically, a mile is going to be a little long for her," Castellano said. "But we took advantage today."

The jockey added that "it was over" after Spiced Perfection got away with the dawdling opening quarter mile in a one-turn event.

"She did it very easily the first part of the race," he said.

Miller trains Spiced Perfection for Pantofel Stable, Wachtel Stable and Peter Deutsch. She was purchased by new connections after prevailing in last year’s La Brea (G1) at Santa Anita Park, then went on to win another pair of races at Keeneland, the Madison (G1) in the spring and the Thoroughbred Club of America (G1) in the fall.

With the Breeders’ Cup returning to Keeneland in 2020, Miller said another crack at the Filly & Mare Sprint — over Spiced Perfection’s favorite track — is her major goal. More immediately, Miller said a race such as Santa Anita Park's Feb. 15 Santa Monica (G2) at 7/8 of a mile is a possibility to get the 5-year-old season started.