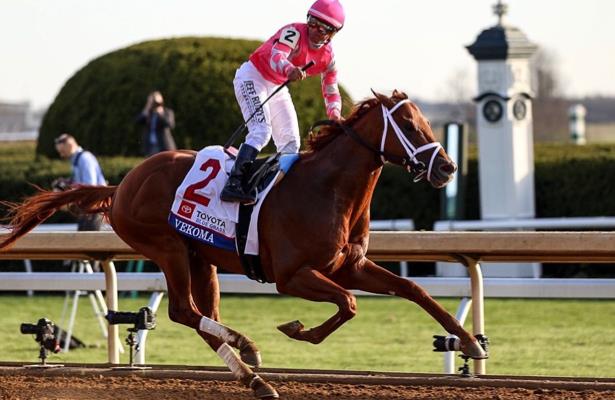 B. Wayne Hughes’ Spendthrift Farm has acquired the breeding rights to multiple Grade One-winning millionaire Vekoma. The four-year-old son of leading sire Candy Ride (Arg) captured the prestigious Metropolitan Handicap-G1 at Belmont on Saturday, staking his claim as one of North America’s top racehorses in 2020.

“We are extremely excited about Vekoma and his future as a stallion. It’s not often you see an elite racehorse that is by a Grade One winner and out of a Grade One winner,” said Ned Toffey, Spendthrift general manager. “Vekoma is a terrific blend of his sire Candy Ride and his Speightstown dam Mona de Momma, showing brilliance from six furlongs to a mile and an eighth and from ages two to four.

"There’s sire power throughout the pedigree, with Vekoma’s second dam being a sister to Mr. Greeley. You just will not find a better-bred son of Candy Ride," Toffey continued. "Vekoma proved he is one of the best horses in training with wins over good fields in the Carter and Met Mile, which have been two of the best performances we have seen this year. The combination of brilliance and pedigree is special.

Trained by George Weaver for owners R. A. Hill Stable and Gatsas Stables, Vekoma has always been one of the top racehorses in his crop, capturing graded stakes wins at two, three and four. After breaking his maiden at first asking in 1:08 4/5 at Belmont, the talented chestnut stretched out to win the one-mile Nashua (G3) at Aqueduct to complete an undefeated juvenile campaign. At three, Vekoma jumped onto the Triple Crown trail, finishing third to Code of Honor in the Fountain of Youth-G2 at Gulfstream in his seasonal debut. He went on to score a dominant 3 ½-length win in the 1 1/8-mile Blue Grass (G2) at Keeneland, earning a berth into the Kentucky Derby.

This year, Vekoma has been perfect in three starts at three different racetracks, kicking off his 4-year-old season with a 3 3/4-length victory in Gulfstream’s Sir Shackleton S. in March. Vekoma earned his first Grade 1 triumph in the form of a dazzling 7 ¼-length win in the Carter Handicap at Aqueduct, earning a career-high 110 Beyer Speed Figure.

Last Saturday, he validated his Carter performance with a front-running win in the aforementioned Met Mile (G1), defeating Grade 1 winners Code of Honor and McKinzie, among others, while stopping the clock in a crisp 1:32 4/5 – just .15 seconds off the stakes record for the 129-year-old fixture in New York.

“Vekoma has been an outstanding talent since the moment we got him. He’s such a special horse,” said Weaver. “We will take our time to enjoy this win, but Saratoga is the likely next place for him to run. We would like to put the horse in a position to become a champion.

An earner of $1,245,525 to date, Vekoma was bred in Kentucky by Alpha Delta Stables. He is out of the Speightstown mare Mona de Momma who scored her biggest win as a racehorse in the Humana Distaff (G1) on the Kentucky Derby undercard at Churchill. Vekoma’s second dam, Society Gal, is a half-sister to successful sire Mr. Greeley.

Vekoma is the third Met Mile winner in the last four years that will take up stud duty at Spendthrift. Mor Spirit, the 2017 winner, and Mitole, the 2019 winner, both stand at the historic Lexington-based farm.