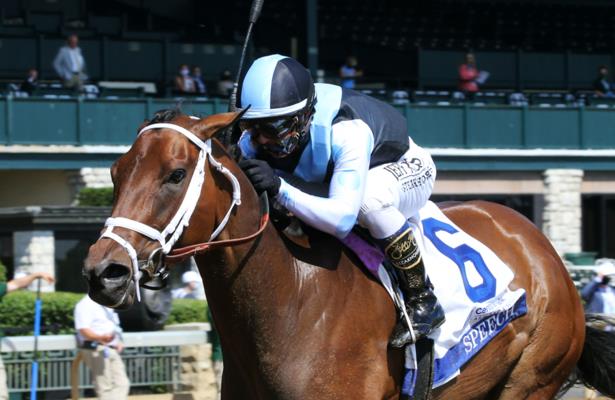 The victory earned Speech 100 qualifying points toward the $1.25 million Kentucky Oaks to be run Sept. 4 at Churchill Downs. Speech now has 160 points, ranking second on the leaderboard for the Oaks, which is limited to the top 14 point earners to pass the entry box.

Speech gave trainer Michael McCarthy his first Keeneland stakes victory. McCarthy watched the victory from Del Mar, where an hour and a half later he won the third race.

“Justin Curran was deputizing on my behalf and was very pleased with them (Speech and third-place Toyota Blue Grass (G2) finisher Rushie) this morning,” McCarthy said via text.

Jim and Donna Daniell’s Rushie is scheduled on the Monday flight to Del Mar.

McCarthy now has eight weeks to get ready to return to Churchill, where he spent several meets as an assistant to Todd Pletcher before going out on his own.

“Most likely both will have a few works here at Del Mar before deciding on a Churchill Downs arrival date,” McCarthy said about Speech and Rushie.

Rushie is not Triple Crown nominated, and plans are uncertain for the colt, who has picked up 40 Kentucky Derby qualifying points for the Run for the Roses on Sept. 5.

“Nothing is set in stone for Rushie,” McCarthy said. “There are plenty of options.”