Special Reserve is HBPA's Claiming Horse of the Year 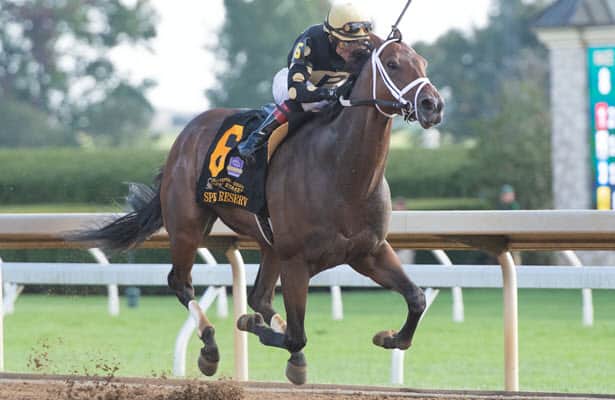 Special Reserve started last season being claimed for $40,000 and ended 2021 as the National Horsemen's Benevolent and Protective Association Claiming Horse of the Year. In between, the 5-year-old gelding won two graded stakes and three stakes overall, finished second by a half-length in Saratoga's Grade 1 Vanderbilt and concluded the season with a very competitive fourth in the $2 million Breeders' Cup Sprint.

"It's been such a great experience, and he's such a great horse," said David Staudacher, who co-owns the Mike Maker-trained Special Reserve with Peter Proscia's Paradise Farms Corp. "This award means a lot. I've been in the business over 40 years, and I had my first stakes win with Mike four or five years ago. I've been claiming horses a long time – claimed some good ones, claimed some not-so-good ones. Love the sport, love the people involved. It's just so much fun."

Echoed Proscia: "He's been a great horse to watch. He tries all the time, and Mike did a great job with him. (The award) was a pleasant surprise. This horse has brought us a lot of fun and success. We're looking forward to his 2022 campaign.”

Each year the National HBPA industry awards committee, chaired by Pennsylvania HBPA executive director Todd Mostoller, reviews nominated horses to choose the one most exemplifying the spirit of a National HBPA Claiming Horse of the Year.

“Claiming horses are the hard-knocking heroes of this industry, who must prove themselves every day through sweat, muscle and heart,” said National HBPA CEO Eric Hamelback. “Each year our awards committee seeks to reward the best representative. As the heart, soul and brawn of American Thoroughbred racing, they are extremely popular competitors. Their stories, and those of their owners, are often easily identified with and appreciated by all racing's fans.

"This year the committee had several quality horses to decide from, and it was a tough choice. In the end, Special Reserve and his connections proved the quality of horses that are found within the claiming ranks, the horses that make this industry's foundation. We are honored to recognize the connections at our 2022 Conference at Oaklawn and recognize them for the accomplishments of such a great horse.”

The National HBPA Annual Conference will be March 1-4 at the Oaklawn Racing Casino Resort in Hot Springs, Ark.

Maker, headquartered in Louisville and with divisions throughout the Midwest and East, has made a career out of claiming horses and turning them into graded-stakes winners.

"He's just phenomenal," Staudacher said. "His program and his team, they're able to move horses up. He's got a real eye for the ones he claims. Winning a couple of stakes races and finishing fourth in the Breeders' Cup was like a dream come true."

Proscia and Staudacher both utilize handicapping "sheets" and liked what they saw in Special Reserve, with Maker in agreement that they try to claim the horse. Proscia, of Garden City, N.Y., said the gelding fit other parameters they use for identifying horses to claim. That Special Reserve was the longest shot (and the only horse in for the claiming price) in the tough second-level allowance/optional claiming race Feb. 6 at Oaklawn didn't bother them. Their faith was rewarded when the gelding won by a neck at 22-1 odds.

"I thought he could move forward," Proscia said. "Did I know he was going to be in the Breeders' Cup? No, not a chance. But he started to develop. We gave him the time he needed, spaced the races out and he rewarded us."

Five weeks after the claim, Maker ran Special Reserve right back for the second-level allowance condition at Oaklawn, resulting in another victory. The gelding subsequently was second in Keeneland's Commonwealth (G3), won Pimlico's Maryland Sprint Match Series Stakes (G3) and the $100,000 Iowa Sprint before his narrow defeat in Saratoga's Alfred G. Vanderbilt.

Special Reserve earned his spot in the Breeders' Cup by taking Keeneland's Phoenix (G2), a "win and you're in" qualifying race for the $2 million Qatar Racing Sprint (G1). That day he defeated eventual Sprint winner Aloha West by a neck. A month later at Del Mar, Special Warrior pressed the very fast favorite Jackie's Warrior, fighting gamely in the stretch before getting passed late to lose the Sprint by 2 1/4 lengths.

Maker said he is particularly happy to see Proscia and Staudacher recognized.

"They love the game, whether it's claiming, buying, betting," he said. "Just great guys. It's a very big deal. They get satisfaction at any level of race and any track. If it was up to Peter, he'd have a horse in every race at every track in America."

"I want to give them a shout out," he said. "The people who should really get the kudos are the ones who work in the barn area. They work all kinds of hours. The people Mike employs are excellent. I've been owning horses since 1989. I have to say, they're exceptional, between the exercise riders, the grooms and the assistants, they do a great job."

Maker said Special Reserve's 6-year-old campaign could resemble last year's path. A definite goal is trying to repeat in Keeneland's Phoenix, especially with the Breeders' Cup being at the Lexington track.

"Hopefully we can duplicate the success," he said.