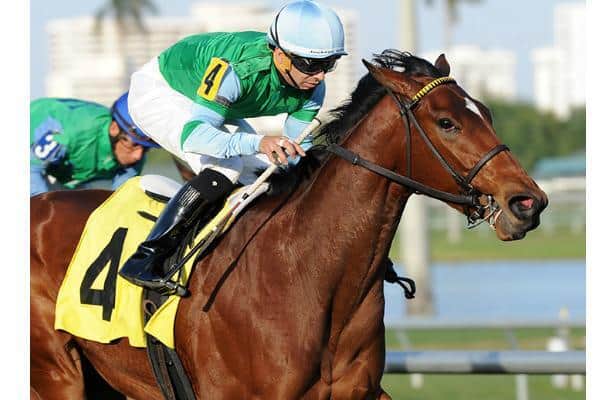 There was no unique winning ticket for the 20-cent Rainbow 6 on Friday, guaranteeing a $200,000 carryover jackpot pool for the popular multi-race wager on Saturday’s 11-race card.

The Rainbow 6 will cover races 6-11 on Saturday, including the inaugural running of the $75,000 H. Allen Jerkens Stakes for 4-year-olds and up going two miles on the turf, slated for race 9.

The Rainbow 6 carryover jackpot is paid out only when there is a single ticket sold with all six winners. On days when there is no unique ticket, 70 percent of that day’s pool goes back to those bettors holding tickets with the most winners, while 30 percent is carried over to the jackpot pool.

Spanish Pipedream made a successful return from a 7 ½-month layoff with a front-running victory in Friday’s feature race.

Owned by Hat Creek Racing, whose partners include Denver Broncos wide receiver Wes Welker, the 3-year-old Scat Daddy filly debuted without blinkers for the first time and went right for the lead from post 4. After setting fractions of 21.51 seconds for a quarter-mile and 44.02 for the half, Spanish Pipedream held off late-running Katie’s Kiss for a one-length victory.

“She’s a very nice filly,” trainer Wesley Ward said. “Being the first time without blinkers she was looking around a little bit. I was really happy she showed the speed she did without them, and I’m hopeful she’ll continue on and go a little further.”

Favored at 4-5 in a field of nine, Spanish Pipedream ($3.80) ran five furlongs in 55.88 seconds over a firm turf course. It was her first start since running fourth of 21 horses, beaten 2 ½ lengths, in the Group 2 Queen Mary Stakes at Royal Ascot in England last June.

“She’s got a great mind to her,” Ward said. “I was a little concerned going to the gate. I had to take her back to the gate since her last race she did get left at Ascot. But, she just zipped right out of there and went about her business and was very professional.”

Bochachica suffered a broken arm and broken jaw when his mount in the second race Jan. 14, Centella, ducked into the gap after the start of the race, unseating the veteran rider.

“I feel good,” Bocachica said. “I broke my arm when I hit the rail, but that doesn’t hurt. My jaw hurts a little, but I’m getting the [wire] out next week, Monday or Tuesday. Then I just have to heal. I’m hoping maybe a month or two before I come back.”