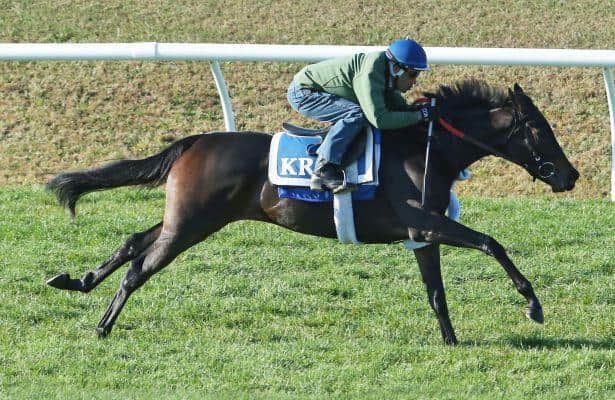 The past two months have been a whirlwind for Reeves Thoroughbred Racing and R.A. Hill Stable’s Spain Burg (FR).

On Sept. 23 in England at Newmarket, the 2-year-old filly won the Shadwell Rockfel (G2), a “Win and You’re In” race for the Breeders’ Cup Juvenile Fillies Turf (G1), by 1¼ lengths at odds of 14-1. The performance improved her record to four wins in five starts.

On Oct. 1 at the Arqana Chantilly Arc Sale in France, Dean and Patti Reeves, in the name of Reeves Thoroughbred Racing, bought Spain Burg for $1,686,000, the second-highest price of the sale. She completed quarantine and remained in training in France with Nicolas Clement.

On Oct. 18, Spain Burg arrived at trainer Kathy Ritvo’s barn at Keeneland. This morning, she worked five furlongs in 1:04 on the firm turf course with David Flores aboard.

“Her record stands for itself,” Ritvo, who won the 2013 Breeders’ Cup Classic (G1) with the Reeves’ Mucho Macho Man, said. “I was really, really excited when (Dean Reeves) called me and told me that we got her. We just started working on getting her here and making a plan.”

At Keeneland, Ritvo has been getting to know Spain Burg while acclimating the filly to a new environment and training routine.

“She goes with the pony and jogs a mile with him and then she gallops another mile and a half,” Ritvo said. “We walk here about 20-30 minutes before we even go up to the track. We try to go when it’s a little quieter.

Ritvo, who has trained a string at Keeneland for the first time this season, was pleased with Thursday’s work, calling it “perfect. Just let her do it on her own. She went good.”

Frankie Dettori, who rode Spain Burg in the Shadwell Rockfel, will be aboard in the one-mile Juvenile Fillies Turf.

“I think she’s going to love the distance,” Ritvo said. “Frankie Dettori said she should like the course at Santa Anita.”

“That was perfect,” Sharp said after the workout. “It is a shame that Majestic Gale probably will not draw into the race. She is a special filly, but she will have to wait and show that later on.”

Tentative plans call for the pair to be flown to Santa Anita on Saturday, but Sharp said Majestic Gale probably will not go because she is unlikely to draw into the race.

The pre-entered Keeneland sales graduates are:

With his performance Wednesday, Casse moved atop the Fall Meet standings with 11 victories, one more than Mike Maker.

Trainer Jack Van Berg recorded his first Keeneland victory since the 1998 Spring Meet when he sent out Muddy Waters Stables’ Texas-bred Eurodevilwoman to win Thursday’s first race. Van Berg now has 47 wins here. He sent out his first Keeneland winner during the 1972 Spring Meet. Declan Cannon rode Eurodevilwoman to win the six-furlong race by a half-length in 1:10.92. …

A race oddity occurred Thursday when the No. 7 horse won the first four races. Eurodevilwoman won the first race and was followed in the next races by Juan Munoz-Cano’s Rare Art, JSM Equine’s Kismet’s Heels and Ken and Sarah Ramsey’s Pinson. …