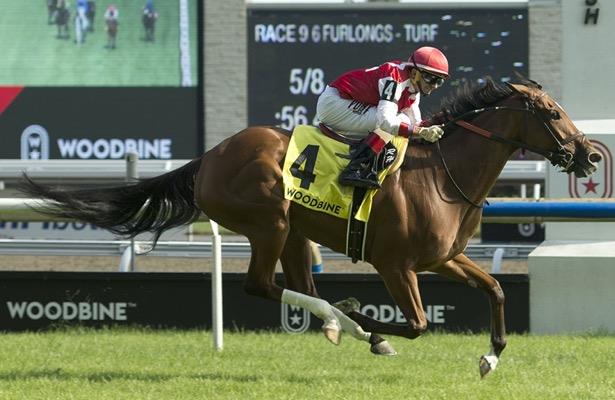 A seven-time winner from 11 starts, Summer Sunday takes on nine rivals, including graded stakes champion Jean Elizabeth, in the six-furlong Whimsical, a main track event for fillies and mares, 4-year-olds and upward.

Bred in Ontario by Trinity West Stables, the daughter of Silent Name out of the Millennium Allstar mare Dancing Allstar arrives at the Whimsical off a series of Tapeta and dirt training works, all at Woodbine.

The latest, at five furlongs, breezing over the dirt training track, timed in 1:03.40, came Saturday.

“She’s doing very well,” Simon said. “We’re looking forward to seeing her run this year. Obviously, it was a big thrill for us to see her win the Sovereign. She had a really good year.”

Summer Sunday debuted in July 2017, winning a 5 1/2-furlong Tapeta race by five lengths. She followed it up with victories in the Nandi Stakes and Muskoka Stakes, ending her season a perfect 3-for-3.

“We knew we had a good one on our hands before the first race,” Simon said. “That first win, she did it so easily. And after that, you realized that she could be a really nice horse. She just became more and more confident.”

After a disappointing ninth-place finish in the Beaumont (G3) at Keeneland in April 2018 to launch her 3-year-old campaign, Summer Sunday proceeded to win four of her next five starts, from April 2018-July 2019.

Summer Sunday closed out last season with a second in the Seaway Stakes (G3) and a fourth in the Ontario Fashion (G3).

“She’s always been a very professional horse,” Simon said. “Whatever the surface, distance or running style, she does everything you ask of her. You love having a horse like that in your barn.”

Jean Elizabeth, who owns a 14-4-2 mark from 20 starts, is no stranger to success at Woodbine.

The 5-year-old daughter of Adios Charlie, trained by Larry Rivelli, who co-owns with Richard Ravin and Vince Foglia’s Patricia’s Hope LLC, took back-to-back stakes at the Toronto oval in 2019.

Bred in Illinois by Rivelli and Ravin, Jean Elizabeth won the Sweet Briar Too in September and followed it up with a three-quarters-of-a-length victory in the Ontario Fashion on Oct. 19. The Sweet Briar Too triumph marked the start of a current seven-race, all-stakes win streak.

Her latest triumph came in the Lightning City Stakes at Tampa Bay Downs. Under Albin Jimenez, Jean Elizabeth set a stakes record of 55.09 seconds, .28 seconds better than Miz Mayhem’s winning time in the previous running of the Lightning City.

“She’s doing really good,” Rivelli said. “I’ve got her here with me at Keeneland. I gave her a little time off after her last race. I had her training and I stopped. I turned her back out and brought her back. I figured this would be a good spot to get her back up and rolling.

“My goal is to run her in the Breeders’ Cup Turf Sprint, if she continues on with her winning ways, and run her in all those stakes at Woodbine on the synthetic. She loves it up there. I think her preference, if I had to prioritize it, would be synthetic, turf, and dirt, last. She loves the Tapeta at Woodbine.”

Jean Elizabeth, who was third in the 2018 edition of the Ruling Angel Stakes at the Toronto oval, continues to impress Rivelli.

“I just think she is getting better,” Rivelli said. “She just always seems to have the will to win. I think she’s really talented, but I think she has a lot of heart to go along with it.”

The gray mare also has a big presence around the Rivelli barn.

“She’s a sweetheart,” Rivelli said. “In the stall, if you come bearing peppermints, she’s the greatest. All you have to do is crinkle the paper on the candy, and she’ll come over to you and lick your hand.

First race post time on Sunday is set for 1 p.m. EDT, with the Whimsical scheduled as the afternoon’s seventh race. Woodbine continues to host racing without spectators. Fans can watch and wager on all the action via HPIbet.com.