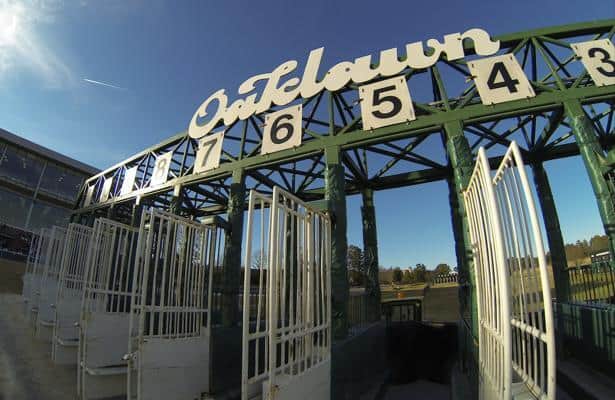 Post positions will be drawn Monday for the Southwest, along with two other stakes races Jan. 29. The 1 1/16-mile Southwest is Oaklawn’s second of four Kentucky Derby points races, offering 17 to the top four finishers (10-4-2-1) toward starting eligibility for the Kentucky Derby.

The Southwest is expected to attract two shippers from Southern California – one for Hall of Fame trainer Bob Baffert (Messier or Newgrange) and one for trainer Doug O’Neill (Slow Down Andy).

Other horses expected to be entered Monday include Dec. 18 Oaklawn maiden special weights graduate Call Me Jamal for trainer Mike Puhich and lightly raced Osbourne for trainer Ron Moquett of Hot Springs. Hall of Fame trainer Steve Asmussen, who has 21 of the 103 nominees, is scheduled to have at least one starter in the Southwest, Pope said.

“I see 10 for sure, with the possibility of a dozen,” Pope said. “And we’re hoping the plane is scheduled to fly in here.”

A flight carrying five Southern California-based horses for Saturday’s stakes tripleheader, including two for Baffert and two for O’Neill, is scheduled to arrive Tuesday in Arkansas, Pope said.

Because Baffert has been suspended by Churchill Downs, his horses are ineligible for Kentucky Derby qualifying points. The suspension stems from a possible medication violation involving his 2021 Kentucky Derby winner Medina Spirit.

Slow Down Andy has won 2 of 3 starts overall, with his only loss a runner-up finish in the $175,000 Golden State Juvenile Stakes Nov. 5 at Del Mar. The 7-furlong race was restricted to California-breds. O’Neill and breeder/owner J. Paul Reddam campaigned Slow Down Andy’s sire, 2016 Kentucky Derby winner Nyquist.

Osbourne will be making his local debut after finishing second in the $400,000 Springboard Mile Stakes Dec. 17 at Remington Park in his last start. Osbourne, who has raced three times, is a gelded son of 2014 Southwest winner Tapiture.

Post positions also will be drawn Monday for the $200,000 Martha Washington Stakes for 3-year-old fillies at 1 1/16 miles and the $150,000 King Cotton Stakes for older sprinters. The Martha Washington is Oaklawn’s first of three Kentucky Oaks points races. Like the Southwest, it offers 17 points (10-4-2-1) to the top four finishers toward starting eligibility for the Kentucky Oaks, the country’s biggest prize for 3-year-old fillies.

Eda and Tonito’s finished 1-3, respectively, in the $300,000 Starlet Stakes (G1) Dec. 4 at Los Alamitos. Eda is also ineligible to collect Kentucky Oaks points because of Baffert’s suspension by Churchill Downs.

The 6-furlong King Cotton field is expected to be headed by Grade I winner Collusion Illusion for trainer Mark Glatt and track record holders Hollis (Ortiz) and Nashville (Asmussen).