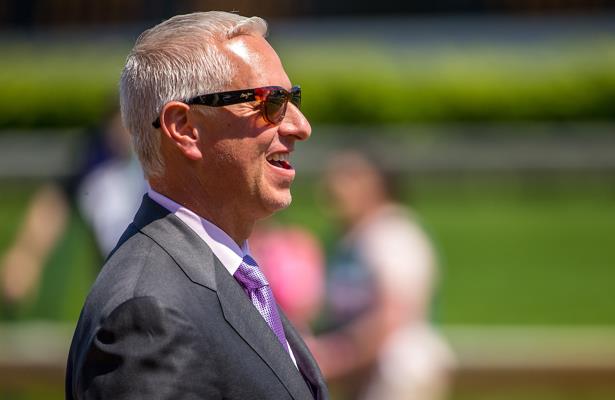 Is this the moment for Todd Pletcher? Shut out thus far on the 2019 Kentucky Derby trail, the race’s all-time leading trainer for total starters will send out the morning line favorite in Monday’s Grade 3, $500,000 Southwest Stakes at Oaklawn Park.

Eleven are entered in all for the 1 1/16-mile President’s Day feature in Arkansas, where Pletcher-trained Cutting Humor will have Hall of Fame jockey John Velazquez in the irons.

Cutting Humor, a son of First Samurai who enters off an allowance runner-up finish at Gulfstream Park, is one of a trio of contenders shipping in to face Smarty Jones Stakes winner Gray Attempt and a quintet of Steve Asmussen-trained runners.

Does this race feature a vulnerable favorite? The chart from Cutting Humor’s last start indicate the colt “lunged at the start.”

“Very green horse, still,” said Velazquez, who has ridden the son of First Samurai in 2 of 4 lifetime starts. “Not very sure of what he needs to do yet. I think if he puts his mind on running, he has a good chance. Hopefully, he’ll pay attention better than last time. He’s definitely a talented horse. Just needs to put his mind on it.”

Gray Attempt is another with a question to answer. He has won his last three races on the front end but landed the inside draw.

“The rail, normally you don’t want it, especially if you’ve got a horse that you’re not sure is going to have any speed away from there because you get covered up,” said trainer Jinks Fires. “He has speed. The next thing is, just hope you get lucky and get away right. I always prefer the 3 or 4 or 5, around that area, but you’ve to take what you draw, I guess.”

Sueno’s certainly one to watch, as he’s trained by Keith Desormeaux, who won the Southwest a year ago with eventual Derby entrant My Boy Jack.

Given the draw, here’s how TimeformUS’ Pace Projector sees the Southwest Stakes field shaping up early:

Monday’s race, which goes as the ninth of 10 on the card, will air on a special edition of FOX Sports Saturday At The Races from 5-6:30 p.m. ET on FS2 including undercard action from Oaklawn as well as a stakes race at Aqueduct. Post time for the Southwest is 6:09 p.m. ET. TVG will broadcast the race, too, or you can live stream it through advanced deposit wagering services such as NYRABets.

• Analysis: Southwest shippers have the edge

Also on the card