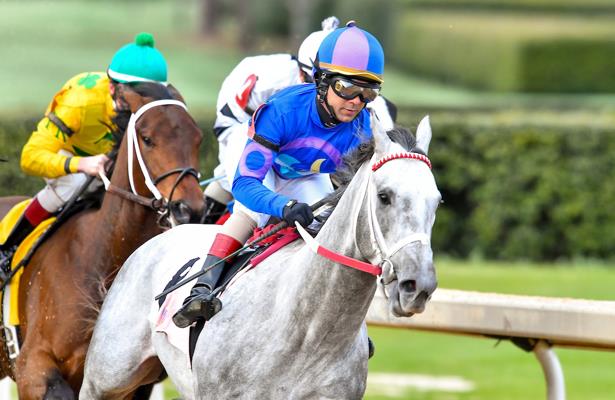 Set for the holiday Monday, the Grade 3, $500,000 Southwest Stakes marks the second of four stops on Oaklawn Park’s road to the 2019 Kentucky Derby. Contested at a mile and a sixteenth, this is one of the final Derby qualifiers offering a 10-4-2-1 point distribution to the Top 4 finishers.

Four of the five most recent winners of the Southwest have gone on to the Run for the Roses with My Boy Jack last year and Suddenbreakingnews in 2016, both finishing fifth. This year's field of 11 features six 3-year-olds coming out of Oaklawn's Smarty Jones, including the winner, Gray Attempt, and five horses from the barn of Hall of Fame trainer Steve Asmussen.

With post time set for 6:09 p.m. ET, here is a full Southwest analysis with a projected morning line by Horse Racing Nation:

Gray Attempt [ML 2-1 – Graydar – W. Fires/S. Bridgmohan – 4: 3-0-0 - $184,700] He has won his last three races in a row in front-running fashion including the Smarty Jones. Obviously, he has already beaten many of the horses in this field and is a deserving favorite. The added distance and the blanket finish last time out doesn’t fill me with confidence when facing a bigger field of challengers. No doubt he’ll go for the lead again, and that is a good place to be when facing Oaklawn’s short home stretch. Vulnerable favorite.

Ninth Street [ML 20-1 – Street Boss – S. Asmussen/D. Cabrera – 7: 2-2-1 - $80,586] Coming out of Asmussen's Louisiana Downs division, this guy is in fine form having a first and a second in stakes races at Delta Downs. Most recently, he ran second to Southwest rival Six Shooter, but that one was only fourth in the Smarty Jones. The son of Street Boss has been training smartly since his last start but faces a big step up in class. Toss.

Cutting Humor [ML 20-1 – First Samurai – T. Pletcher/J.Velazquez – 4: 1-2-1 - $54,500] He is likely to be a big price for a Todd Pletcher runner on the Derby trail. Cutting Humor broke his maiden in November at Gulfstream Park West and has run behind some decent horses, but we are not used to this kind of so-so- resume from a Pletcher contender in a points prep. Toss.

Boldor [ML 8-1 – Munnings – S. Asmussen/R. Vasquez – 3: 1-1-1 - $60,700] A third-place run in the Smarty Jones left him in a blanket finish with Gray Attempt and his stablemate, Long Range Toddy. He has shown versatility in his three-race career by breaking his maiden on the lead and then sitting off the pace in his next two starts. Staying close to the lead while going two-turns at Oaklawn appears to be a good idea. Use underneath.

Jersey Agenda [ML 10-1 – Jersey Town – S. Asmussen/R. Santana Jr. – 3: 2-1-0 - $118,400] He is a new face in the race from the Asmussen barn. The Charles Fipke homebred won his last two starts, including an allowance score on the front end while going a mile at Oaklawn. He will find plenty of competition for the early lead in his first try in stakes company. Live longshot.

Super Steed [ML 30-1 – Super Saver – L. Jones/T. Thompson – 4: 1-1-0 - $64,500] He has chased Gray Attempt in his last two starts without much luck, including running seventh in the Smarty Jones. Trainer Larry Jones is hoping that he can return to the form he showed running big in a Churchill Downs allowance last November. He will need his very best closing run in here. Toss.

Sueno [ML 6-1 – Altreides – K. Desormeaux/Corey Lanerie – 4: 2-1-1 - $90,440] Last year, My Boy Jack took a similar path down the Derby trail for Desormeaux when he went from the Sham at Santa Anita to the Southwest and eventually was fifth in the Run for the Roses. Sueno won a stakes race at Golden Gate Fields two back and could have run in Saturday's El Camino Real Derby, but Desormeaux chose this more lucrative path on the Derby trail. Sueno had the lead in the Sham only to be run down late by the talented Gunmetal Gray. The top choice.

Six Shooter [ML 20-1 – Trappe Shot – P. Holthus/S. Elliot – 8: 3-0-3 - $131,350] After making a mild rally, he ran fourth in the Smarty Jones to follow a stakes victory Delta Downs. This figures to be a tough spot again but trainer Paul Holthus comes from a family of Southwest winners, as his father, Bob Holthus, won this race five times from 1988 to 2006, more than any other trainer. Note that blinkers are going on. Toss.

Bankit [ML 4-1 – Central Banker – S. Asmussen/J. Ortiz – 7: 2-3-0 - $330,625] This New York-bred disappointed with an uninvolved sixth-place finish in the Smarty Jones, which came on the heels of a big closing run in the Springboard Mile. That loss by a head had Bankit bet to favoritism last out, in what was the seventh start in his career that dates back to June. Here he is again without a break in traning. Bankit deserves another chance to bounce back, with that last race was the first time this runner did not compete. Use underneath.

Long Range Toddy [ML 7-2 – Take Charge Indy – S. Asmussen/R. Eramia – 5: 3-1-0 - $351,125] The second-place finisher in the Smarty Jones got a great ground-saving trip in that race and just missed behind Gray Attempt. He showed courage racing in tight quarters and battled to the wire. He has run four big races in a row since September. Will he be able to take a step forward and win here? Use underneath.

Olympic Runner [ML 10-1 – Gio Ponti – M. Casse/D. Cohen – 2: 1-0-0 - $33,800] This Mark Casse runner takes a path similar to that of War of Will, the likely favorite in the Risen Star. The turf runner switched to the dirt, won on a sloppy track, and now gets tested on the Derby trail. That is not to say that this one will be as good as War of Will. The win on the sloppy track came on the front end as the favorite. Live longshot.

Summary: With Gray Attempt returning to try and win his fourth straight race in the Southwest, it is worth noting that since the inception of the Smarty Jones Stakes in 2008, only one winner of that race has come back to take the Southwest and that was Far Right in 2015.

The blanket finish of the top three in the Smarty Jones is an indication that this is an evenly matched field. There is a good mix of horses that will provide a competitive early pace and those that will be making a late closing.

The Southwest feels like a race that will be won by a new face, and it might be a wise strategy to leave the six Smarty Jones runners out of the top spot. Instead, consider newcomers like Sueno, Jersey Agenda and Olympic Runner.