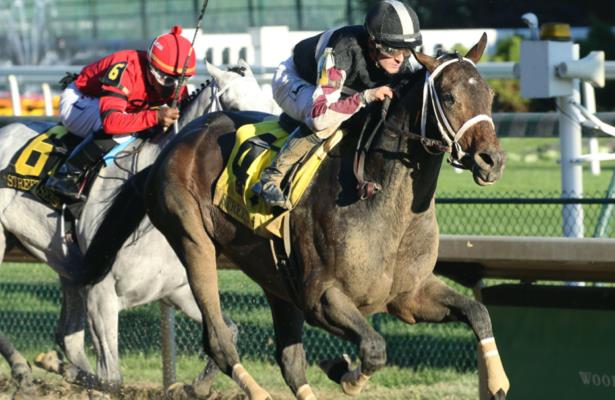 Having recently been purchased and moved to the barn of Hall of Fame trainer Bill Mott, stakes-winning sophomore South Bend is being pointed to the Grade 1, $1 million Travers on Aug. 8 at Saratoga as the debut for his new connections.

Additionally, trainer Michael Stidham on Friday said Mystic Guide is possible for the Travers following his third-place effort in the Peter Pan (G3) on opening day at Saratoga.

Campaigned by Sagamore Farm through his first 11 starts, including a victory in the Street Sense last fall at Churchill Downs and Grade 3 placings on both turf and dirt, South Bend was acquired by a partnership group that includes Gary Barber, Adam Wachtel, Peter Deutsch and Leonard Schleifer of Pantofel Stable.
"I think that's one of the reasons they bought him," Mott said. "He looks good on both surfaces."
Mott said the focus for now is on dirt, namely the 1 ¼-mile Mid-Summer Derby, the centerpiece of the Saratoga meet being contested for the 151st time but first as a point qualifier for the Grade 1 Kentucky Derby September 5.
"We're leaning toward the Travers. The partnership group wants to have a good look at that," Mott said. "We're seriously thinking of the Travers right now. He'll work probably the first part of the week."

South Bend has already had one breeze for Mott, a half-mile move in 49.12 seconds on July 27 over the Oklahoma training track, fifth-fastest of 31 horses at the distance. Third in the Grade 3 Palm Beach in February at Gulfstream Park in his second try on turf, the bay Algorithms colt exits a rallying runner-up finish in the Grade 3, 1 1/8-mile Ohio Derby on June 27 at Thistledown in his return to dirt, posting a career-high 94 Beyer Speed Figure.

"We breezed him the one time. We like the horse, he's doing well," Mott said. "He's a nice horse to train. He moves well and he worked well for us. I'm happy with him."

Godolphin homebred Mystic Guide, who was a closing third in the Peter Pan, is also under consideration for the Travers.

Mystic Guide will have his first breeze back Saturday at Stidham's base at Fair Hill Training Center in Elkton, Maryland and will work with blinkers on.

"The Travers is a possibility. He'll work tomorrow and we'll know more after he works," said Stidham. "Ultimately, he has to put himself in a better position early. You can't win those types of races with that much to do late in the race. Our goal was to try blinkers on him and see what type of response he gives, so we can try to be a little bit closer."

By Ghostzapper, the royally-bred colt is out of five-time Grade 1-winner Music Note who was runner-up in the 2008 Grade 1 Alabama and victorious in the 2009 Grade 1 Ballerina at Saratoga.

Mystic Guide made his first two starts at Fair Grounds including a debut third in a six-furlong sprint in February ahead of a five-length maiden score when travelling 1 1/16-miles on March 21 that earned an 84 Beyer.

The colt was expected to make his seasonal debut in the Grade 3 Matt Winn at Churchill Downs on May 23, but altered course to avoid a showdown with fellow Godolphin runner Maxfield, who won the event in fine fashion for trainer Brendan Walsh.

Mystic Guide was re-routed to Belmont for a 1 1/16-mile June 4 allowance tilt where he rallied to finish second behind Tap It to Win with eventual Peter Pan victor and likely Travers rival Country Grammer 1 1/2-lengths back in third.

With Jose Ortiz aboard for the first time in the Peter Pan, Mystic Guide settled in eighth position in the nine-furlong event before tipping into the four-path for the stretch run and rallying to finish third, 3 1/2-lengths back of the victorious Country Grammer, who was a neck better than Caracaro.