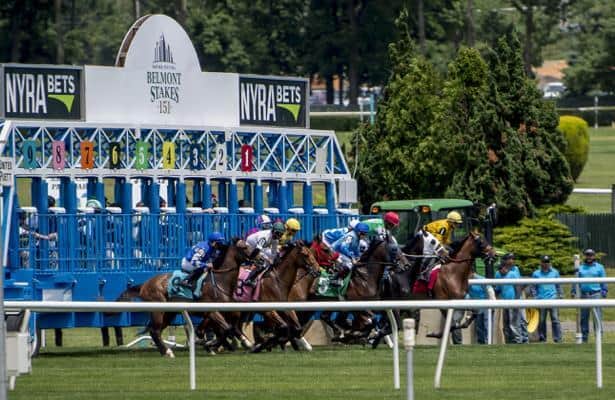 Multiple stakes-winner Souper Escape will look to build on a runner-up effort against allowance company last out, cutting back in distance in Friday's $80,000 License Fee for fillies and mares 4 years old and up going six furlongs on the inner turf at Belmont Park.

Owned by Live Oak Plantation, Souper Escape returned off a six-month layoff to run second in her 2020 bow on June 6 at Woodbine. The Medaglia d'Oro filly won the Christiana and the La Lorgnette at Delaware Park and Woodbine, respectively, as a sophomore in 2019 and will be returning to stakes company for the first time as a 4-year-old.

Trainer Michael Trombetta said he was curious to see her in the short sprint after she capped her 3-year-old campaign with a 10th-place finish in the 1 1/16-mile Tropical Park Oaks in December at Gulfstream Park. Both of the Florida homebred's stakes wins came at distances of at least one mile, with the License Fee marking her shortest race on turf.

"She's doing good. She's one of those horses where anything outside a mile, it might be a bit much," Trombetta said. "I'll take a look at this and see how she fits with this group. Last out, it was a good race back off the layoff, so it gives me good reason to take a look at this."

Manny Franco will pick up the mount, drawing post 5.

"I think she can run any way," Trombetta said. "What I don't think she wants are those mile and an eighth races, things like that."

Trombetta will also saddle A Great Time, who came off a 10-month layoff when she ran third in an allowance contest on May 30 at Laurel Park. The effort marked the Street Magician mare's first start since a second-place effort in the Jameela in July at Laurel.

Hall of Famer John Velazquez will ride from post 2.

Bal Mar Equine's Dalika started her career in her native Germany before arriving in the United States for her 3-year-old year in 2019. Under trainer Al Stall Jr., the daughter of Pastorius twice ran second in stakes, including a game effort in the Grade 2 Mrs. Revere in November at Churchill Downs when just a half-length back to winner Nay Lady Nay in the 1 1/16-mile route.

Dalika's only previous experience shipping into New York resulted in a strong runner-up effort in the Riskaverse last August at Saratoga Race Course. After running all of her first seven North American races between one mile and 1 1/8 miles, Stall entered her in a sprint last out, where she made her first start in nearly five months and posted a two-length win in a 5 1/2-furlong optional claimer at Churchill under jockey Joel Rosario.

"We just want a race with a fast pace," Stall said. "When she has that it in front of her, it helps. Her last race was visually very impressive. Joel just jogged her past the wire. One turn with a solid pace is what she needs. She runs a better race when you don't grab her and it turns into a wrestling match."

Rosario will have the return call, breaking from the outermost post 8.

Getmotherarose, the winner of the Grade 3 Honey Fox in February at Gulfstream Park, will try her hand again on the Belmont grass after running ninth on a yielding Widener turf in the Grade 3 Intercontinental on June 6.

Trained by Thomas Bush, Getmotherarose won two turf sprints at Belmont last year. Jose Lezcano will be in the irons from post 3.

Jonathan Thomas will saddle a pair of entrants in Bridlewood Cat and Escapade.

The lightly raced Bridlewood Cat broke her maiden at second asking in October at Belmont and capped her sophomore year with another win against allowance company. The $750,000 purchase at the 2017 Keeneland September Sale, Bridlewood Cat made her first stakes start, finishing fourth in the Correction on March 14 at Aqueduct Racetrack. Irad Ortiz Jr. will ride from the inside post.

Her stablemate, Escapade, ran fifth in her first start of the year in the Lightning City in February at Tampa Bay. She will return to Belmont for the first time since her career debut in June 2017, drawing post 6 and picking up the services of Hall of Fame jockey Javier Castellano.

The seventh running of the License Fee, slated as Race 9 at 5:36 p.m. will feature on America's Day at the Races, produced by NYRA in partnership with FOX Sports, and airing live on FOX Sports and MSG+.