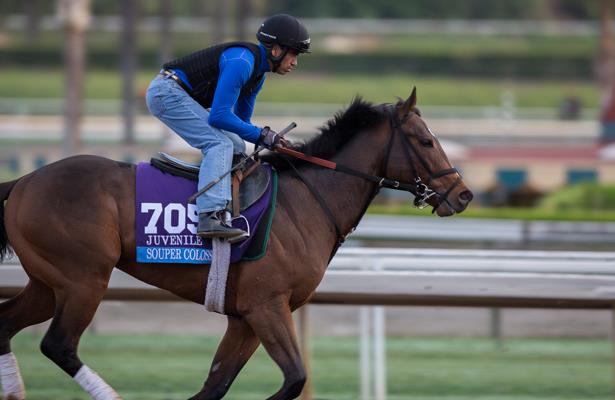 The Eddie Plesa, Jr.-trained Souper Colossal will return to the races for the first time since contesting the Breeders’ Cup Juvenile (G1) in Saturday’s Texas Glitter, a five-furlong turf stake for 3-year-olds.

After stablemate Mr. Jordan posted back-to-back emphatic victories in South Florida in the Juvenile Sprint and Smooth Air stakes at Gulfstream Park West, the attention shifted away from Souper Colossal, a two-time stakes winner in his own right. But with Mr. Jordan now on the shelf after suffering a ligament injury in a December workout, Souper Colossal has the chance to regain the spotlight.

After winning his first three starts by a combined 11 lengths, Souper Colossal shipped westward for the Breeders’ Cup, but a win on Championship Weekend was not to be, and the son of War Front finished a troubled seventh in the Juvenile. Following that start, the winner of the Tyro and Sapling stakes at Monmouth Park was given some time off at owner Live Oak Stable’s farm in Ocala before returning to training with Plesa’s string at Gulfstream Park West in December. The Texas Glitter will be the colt’s first start on turf.

“He’s been working very, very well and he’s exactly where I want him to be,” Plesa said. “The plans are to run him in the Texas Glitter and just use that as a prep maybe for the Swale (G2, at Gulfstream on Feb. 28).”

Souper Colossal will face It’s Not Me, a multiple stakes-winning son of D’wildcat. It’s Not Me, trained by Jorge Navarro, will wheel back for the race just 11 days after winning the OBS Sprint Stakes at the Ocala Training Center by an eye-opening 8 ¾ lengths on Jan. 27. The 3-year-old gelding previously ran third in the Spectacular Bid Stakes at Gulfstream on Jan. 3 and won the Nov. 29 Buffalo Man Stakes at Gulfstream Park West.

Moon River, winner of the Jamestown Stakes at Laurel in his career debut, and well as Nun the Less, who finished second in the Street Sense Stakes at Churchill Downs in October, were also entered in the Texas Glitter. Chocolate Wildcat, D’tumbling Dice, Posse Dreamin, Pow Wow Pal, and Social Request round out the field.