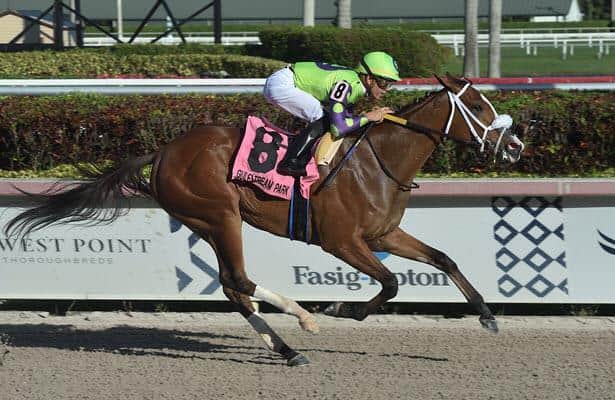 If Sound Machine can notch her first graded-stakes success in Saturday’s $100,000 Hurricane Bertie (G3) at Gulfstream Park, it will be music to trainer Saffie Joseph Jr.’s ears.

The Hurricane Bertie, a 6 1/2-furlong sprint for fillies and mares, headlines a 12-race program that will also include the $75,000 Melody of Colors and the $75,000 Texas Glitter.

Owned by e Five Racing Thoroughbreds, Sound Machine has had her moments during her 11-race career. But the multiple graded stakes-placed 4-year-old filly also has hit a few sour notes, including an off-the-board performance behind Pacific Gale in the Jan. 23 Inside Information (G2) at Gulfstream.

The daughter of Into Mischief tuned up for another encounter with the John Kimmel-trained Pacific Gale Sunday with a sharp half-mile workout in 47.05 seconds while working in company with Collaborate, a brilliant maiden winner who Joseph is pointing to the March 27 Curlin Florida Derby (G1) presented by Hill ‘n’ Dale Farm at Xalapa.

“She had a good work with Collaborate the other day. Going into this race we think we have a chance,” Joseph said. “Obviously, John Kimmel’s horse will be the favorite. We’re hoping to get her to run a big race. We’d like to get a graded-stakes win out of her. This looks like a good opportunity to get it done.”

Sound Machine is winless in seven starts since capturing the 6 1/2-furlong Glitter Woman by 6 1/2 lengths in January 2020, but she produced a graded-stakes finish in the Miss Preakness (G3) at Pimlico, where she rallied to third, beaten 1 1/2 lengths, after getting bumped at the start. The Florida-bred filly followed up her disappointing effort in the Inside Information with a third-place finish in an optional claiming allowance.

“She’s going to have to run the best race of her life, but we feel she can improve,” Joseph said. “She always seems to have a short run in her, and you have to time it well. We did a minor throat procedure after her last start. We hope that helps. If it does help her, I think she’ll be able to sustain a longer run.”

Tyler Gaffalione has the return call on the $500,000 yearling purchase.

Tobey Morton’s Pacific Gale had gone winless in 17 starts before breaking through with a two-length victory in the Inside Information. During the dry spell, the daughter of Flat Out was stakes-placed eight times and graded stakes-placed on five occasions, including a second-place finish in the 2019 Hurricane Bertie.

In the Inside Information, the 6-year-old veteran stakes performer made a three-wide rally into the stretch and drew off to score by 2 3/4 lengths.

Junior Alvarado has the mount aboard Pacific Gale.

Saguaro Row, also a 6-year-old veteran stakes mare, is scheduled to make her first start for Greenville Stable and trainer Kent Sweezey in the Hurricane Bertie. The daughter of Union Rags is coming off a third-place finish in the Jan. 20 Interborough at Aqueduct.

Paco Lopez has the call.