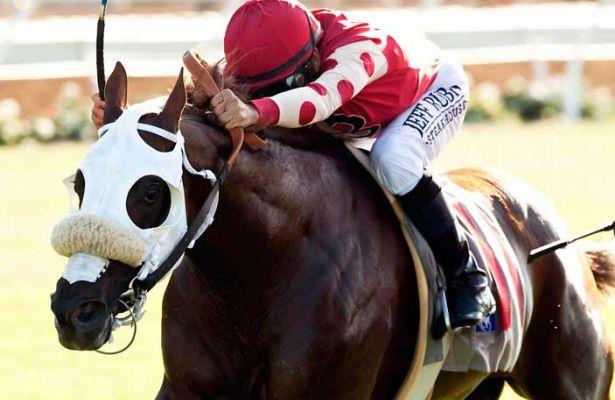 Bloom Racing Stable’s Soul Driver, piloted by Hall of Famer Mike Smith, held on gamely in the final strides to withstand the last-ditch challenge of pacemaking Forest Blue and Victor Espinoza to win the featured $114,500 Oceanside Stakes on opening-day of the Del Mar summer racing season.

Far back in the early stages of the one-mile contest over the infield Jimmy Durante Turf Course, Soul Driver, a solid second choice at 5-2 in the field of eleven three-year-olds, encountered traffic trouble on the far turn before darting between horses entering the stretch to move into contention.

He hooked up with 8-1 Forest Blue in mid-stretch and then outdueled that rival to the wire in scoring by a nose in 1:35.86 for the distance. Royal Albert Hall, a 12-1 outsider, was a distant third, 3 ½ lengths farther back and a nose in front of fourth-place Tried and True.

Papacoolpapacool, the 6-5 favorite under Gary Stevens, was pushed extremely wide while rallying into the stretch and wound up fifth. Scratched from the original line-up was Ground Rules.

Racing resumes Friday with the first race scheduled for 4 p.m.