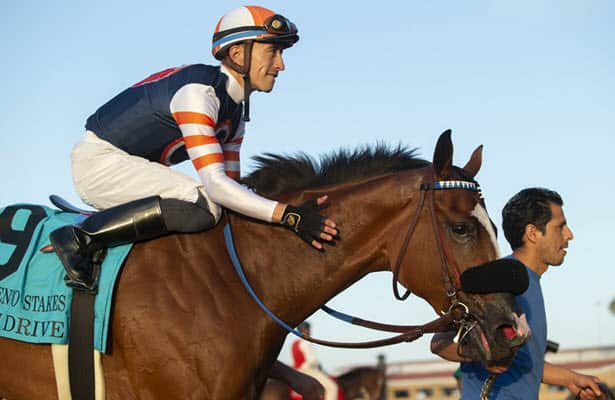 Eight 2-year-old fillies will battle over seven furlongs on at Del Mar on Sunday in the 71st edition of the Del Mar Debutante (G1), the annual championship race for juvenile misses at the seaside summer session.

Besides the Debutante, the track also will present the 10th running of the $100,000 Del Mar Juvenile Fillies Turf, a mile test on the Jimmy Durante Turf Course that in the past has served as a stepping stone to the $1 million Breeders’ Cup Juvenile Fillies Turf, which will be run at Del Mar on Friday, Nov. 5.

The Debutante will go as race 10 on the 11-race card that has an early starting time of 1:30 p.m. The Juvenile Fillies Turf will be run as race 9.

The Debutante is headed by a pair of sharp fillies who had to be divided by the photo finish camera when they met here on Aug. 6 in the Sorrento Stakes (G2). Little Red Feather Racing’s Elm Drive hung tough to come out on top by a head that day with a game Eda, who is owned by Baoma Corp, right alongside her.

Each of those fillies has run twice, Elm Drive having scored a handy eight-length victory at Los Alamitos in her debut on June 26 and Eda finishing second – but being elevated to first – in her racing bow at Santa Anita on June 26.

Further, both fillies came out of the Ocala Breeders’ Sale of 2-year-olds in training this past March in Florida. Elm Drive, who is by the Tapit sire Mohaymen, fetched $165,000. Eda, a daughter of Munnings, brought $550,000.

The previous Sunday Baffert had brought Velazquez west to handle Kentucky Derby winner Medina Spirit in his comeback race and saw him ride the colt to a length and a quarter victory in the Shared Belief Stakes.