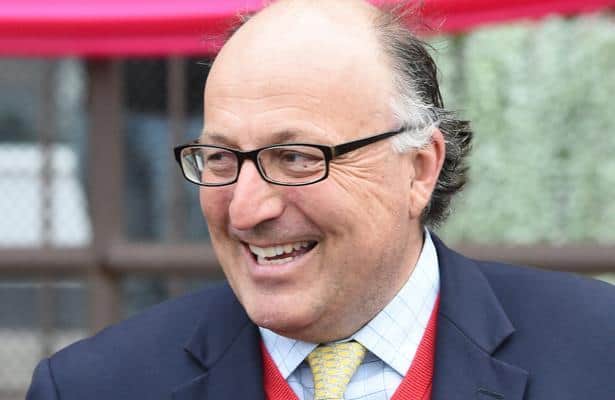 He’s had a quiet Championship Meet by his standards, with seven wins from 54 starters, but trainer Christophe Clement is hoping to make some noise with European import Sorrel in Saturday’s Grade 3, $100,000 Orchid at Gulfstream Park.

Bred in Ireland by owners George Strawbridge and James Wigan, Sorrel will be making her first North American start in the Orchid. The 4-year-old daughter of Group 3 winner and five-time Group 1-placed Dansili comes in on a three-race win streak, all at 1 1/2 miles or more, the most recent Oct. 29.

“She came to us in the fall of last year – nice filly,” Clement said. “She won a stake the last start for Michael Stoute in England on the Polytrack, which is interesting because it’s a different kind of form, going long – a mile and five-eighths.

“She’s very athletic; not much to look at, just the most beautiful mover,” he added. “Very light on her feet. The works have been fair, not great, but she’s a mile-and-a-half filly so you don’t expect her to show that much speed at the end of the day. Very willing and extremely athletic, and I’m excited to see her run.”

Clement has won the Orchid seven times in his career, including four in a row from 1999 to 2002, and most recently with Beauty Parlor in 2015. Hall of Famer Javier Castellano will ride from Post 5 in a field of 10.

Sorrel will have to contend with Repole Stable homebred Always Shopping, who became a graded-stakes winner on two surfaces in the 1 1/2-mile La Prevoyante (G3) Jan. 23 on the Gulfstream turf. It was her second victory of the Championship Meet following the 1 3/16-mile Via Borghese Dec. 19.

“She seems to handle these longer distances really well and she’s in good form, so we’ve been pointing to this for a while,” trainer Todd Pletcher said. “She seems to be doing great and seems to like the course here. We’re happy with her and looking forward to it.”

Always Shopping won the 1 1/8-mile Gazelle (G2) on the Aqueduct dirt in 2019 but has found a home going long on the grass. Since the full-time surface switch she has three wins and a second in the Dowager (G3), where she was beaten a head last fall, and owns three wins and a third in five tries over the Gulfstream turf.

“She’s a graded-stakes winner on both surfaces but as she’s gotten older I think she’s kind of found her niche on the turf and seems to like these longer races,” Pletcher said. “She’s versatile enough and she’s trained well on the dirt, but we’ll stick to the turf as long as she continues to have success.”

Irad Ortiz Jr. rides from Post 9 at top weight of 123 pounds for Pletcher, a five-time Orchid winner, including 2005 and 2006 with Honey Rider and most recently 2016 with Photo Call.

Trainer Mike Maker will try to play spoiler with Three Diamonds Farm’s Enjoyitwhilewecan, a 5-year-old Quality Road mare that has run second in back-to-back optional claiming allowances this winter at Gulfstream by less than a length combined.

Enjoyitwhilewecan came up a nose short going 1 1/16 miles Feb. 14, four weeks after being beaten a half-length by fellow Orchid contender Crystalle at 1 7/16 miles. Tyler Gaffalione has the call from Post 2.

“She had a couple of tough beats here, and we’re trying to get a little black type for her,” Maker said. “It’s a big step up, but if we get a chance to get some black type it would help her and make it work taking a shot.”

Hall of Fame trainer Bill Mott entered the pair of Maram’s Delta’s Kingdom, runner-up to Always Shopping in the La Prevoyante in her lone start of 2021; and George Krikorian’s War Like Goddess, fifth in the 1 3/16-mile The Very One after going undefeated in two starts at 2. Mott has won the Orchid three times, the last with Dress Rehearsal in 2009.

Stakes winner Belle Laura, placed in four career graded-stakes including a second in the $100,000 The Very One (G3) last out Feb. 27 at Gulfstream; stakes winner Morning Molly, second by less than a length in the Hillsborough (G2) Feb. 27 in Tampa; Sister Hanan, third in the 2021 The Very One and 2020 Honey Fox (G3), and Dizzy round out the field.