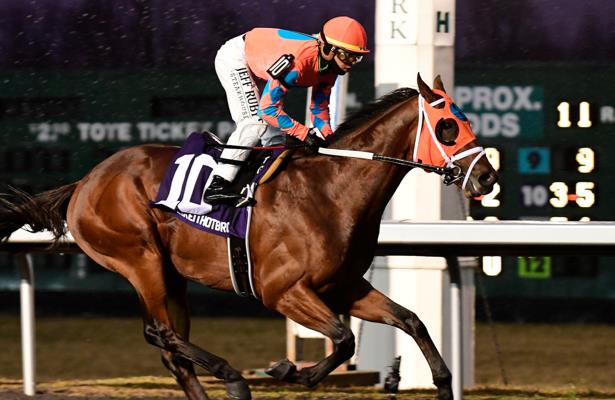 Of the decision, Maker said, “He’s handled everything we threw at him and them some.”

Somelikeithotbrown, who has made seven career starts, last ran on the dirt in his career debut on July 23 at Saratoga. He finished seventh that afternoon in the slop.

Somelikeithotbrown scored going the Blue Grass’ 1 1/8-mile distance in the Jeff Ruby, formerly known as the Spiral. Whereas in the past the race has rated highly enough to earn an automatic berth to the Derby, this year, the winner received 20 points.

A finish in the Blue Grass’ trifecta should punch Somelikeithotbrown’s ticket to Churchill Downs. Then again, he may need to do one better.

Harvey Diamond, a partner with co-owner Skychai Racing, which campaigns the colt with Sand Dollar Stable, said after the Ruby that, “I think unless you run first or second in a prep race, history will show you you’re not going to win the Derby.”

These connections have run six horses in the last 10 years on the first Saturday in May, with the best finish so far ninth by Hansen in 2012.

“Another ninth place in the Derby just to say we ran isn’t what we intend to do, nor do we intend to knock a horse out for a good part of the year trying to fulfill one of our fantasies,” Diamond said.

Somelikeithotbrown has won three times and also ran big in defeat to nearly take the Breeders’ Cup Juvenile Turf on the front end, at the wire just 3/4 of a length behind Line of Duty at Churchill Downs.