Society takes them from gate to wire to win Cotillion Stakes 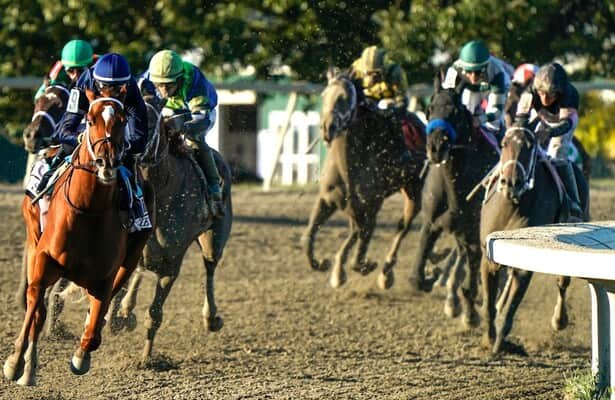 Society used her speed to her advantage to win the 52nd running of the $1 million Cotillion Stakes for 3-year-old fillies by 5 3/4 lengths under jockey Florent Geroux on Saturday at Parx Racing.

The Kentucky-bred daughter of Gun Runner finished under a hand ride at 1:42.94 for the 1 1/16 miles on the fast, main track to score her first Grade 1 victory.

“I was content just to keep her off of the pace if it was honest enough,” Geroux said. “But honestly, after three jumps I was already in the lead. I was clear. Everything went very nicely. I just tried to relax as much as I could. She’s extremely quick. Those horses have a ton of speed, so the worst thing you can do is try to and get them off rhythm. You want to try and stay the same tempo and keep them relaxed.”

Shipping in from Saratoga for Hall of Fame trainer Steve Asmussen, the 7-1 Peter E. Blum Thoroughbreds homebred played the role of spoiler as Secret Oath came in looking for her second Grade 1 win of the season along with the Kentucky Oaks. A win by the 2-1 second choice also would have put the D. Wayne Lukas trainee back into the conversation for champion 3-year-old filly. Nest would appear to sit atop the list with three Grade 1 wins on the season.

Briland Farm’s Secret Oath, who usually stalks the pace on the front end, instead dropped back early under Luis Saez and held sixth as Society ran the opening quarter in 23.33 seconds. Goddess of Fire and Green Up ran second and third, respectively, behind Society’s half-mile in 46.75 seconds. Saez began to hustle Secret Oath amid a three-wide run and closed into third while Society ran six furlongs in an effortless 1:10.93.

Society got a subtle urge at the top the stretch by Geroux, and after running a mile in 1:36.29 and a few left-handed taps of the crop, she widened her advantage to the finish. Secret Oath weakened from there and wound up two lengths behind hard-charging long shot Morning Matcha for the place spot. Green Up finished 6 1/4 lengths behind Secret Oath in fourth as the 9-5 favorite.

Despite the loss, Lukas remained set on sending his filly on to the Breeders’ Cup Distaff on Nov. 5 at Keeneland.

“Do you ride for second, or do you try to ride the one that is out there down?” Lukas said. “(Secret Oath) made that big move on the middle of the turn, and she is running faster than any of them. (Geroux) had to make that move. The pacesetter was just too far in front.

“I was concerned when (Society) was on the far side over there approaching the three-eighths pole. We were really going to have to pick it up in order to catch the one that was cruising up front. Secret Oath ran her race today. I didn’t see anything that I didn’t like, except we were trying to chase down a tremendous bias. We weren’t the only ones chasing, what, five, six, seven, eight lengths? We were all chasing the bias.”

LC Racing, Cash Is King and Gary Barber’s Morning Matcha, starting in her first Grade 1 stakes for Parx-based trainer Butch Reid, closed from last thanks to a ground-saving trip under Paco Lopez to gain the runner-up spot at 48-1.

“That was the plan. I knew she’d come running,” Reid said. “That one horse (Society) got loose, you know, but she came flying. She ran on the inside, and just a great job by Paco. She ran great.”

Society, making her fifth start of the year, owns two consecutive wins after her 6 3/4-length victory in the Charles Town Oaks (G3) on Aug. 26. That was her second graded-stakes start after finishing fourth in the Coaching Club American Oaks (G1) at Saratoga.