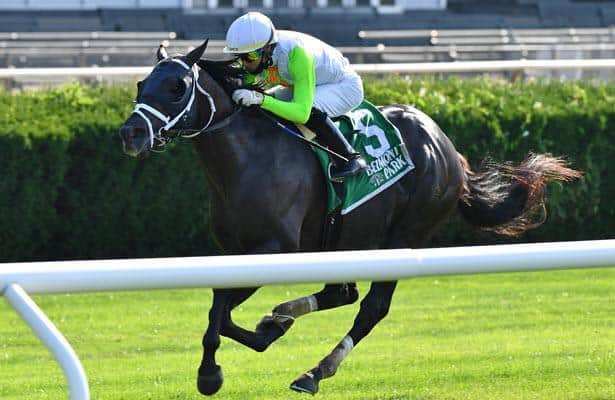 The Elkstone Group's Social Paranoia took the overland route when rallying to a second graded stakes win this season in Saturday's $150,000 Poker Stakes (G3) at Belmont Park on Saturday.

Social Paranoia had just one horse beaten in the one-mile Poker as Dream Friend set moderate fractions of :24.50 and :49.28 for the opening half mile with Got Stormy and Valid Point stalking the pace.

After six furlongs reached in 1:13.07, the three front-runners and Seismic Wave were among a quartet of horses lined up on the lead when turning from home. Seismic Wave first managed to wrest the lead in mid-stretch, but rolling along the outside came Social Paranoia and jockey Jose Ortiz, who kicked clear and won going away.

"I think the soft ground helped a little bit today," Ortiz said. "He's good at a mile, a mile and a sixteenth, a mile and an eighth. He can do whatever because he relaxes early, which is the most important thing in these turf races."

Seismic Wave checked in second and was followed by 5-2 favorite Value Proposition with Got Stormy filling out the superfecta. Trained by Todd Pletcher, Social Paranoia completed the trip on firm turn in 1:36.30. He paid $11.20 as the 9/2 second choice.

"He's a very, very solid horse and he always shows up," Pletcher said. "The only time he didn't fire was in the Fort Marcy last time out and that was a tactical error on our part."

A 4-year-old colt by Street Boss, Social Paranoia won the Appleton (G3) at Gulfstream Park in March and was third in the Sunshine Forever in south Florida before most recently running sixth in June 6 Fort Marcy (G2) at Belmont Park.