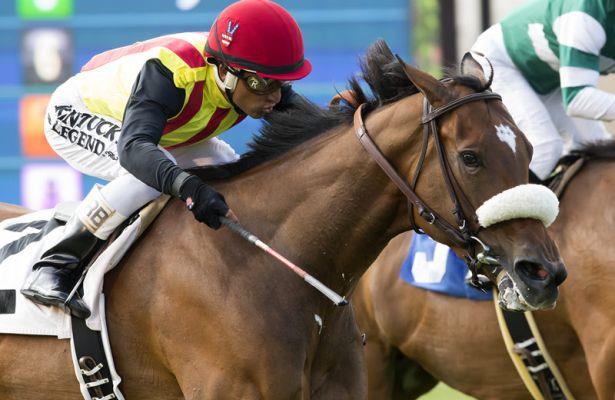 Sobradora Inc, unbeaten in four starts in her native Argentina, made an auspicious United States debut Sunday as she scored an upset triumph under jockey Rafael Bejarano in the featured $80,035 Osunitas Stakes for older fillies and mares.

Shuffled back to eighth and last turning into the stretch, Sobradora Inc rallied impressively in the middle of the course to hit the front nearing the wire, a half-length in front of Prize Exhibit, with Elektrum another head back in third.  Havanna Belle was fourth with Juno, the 2-1 favorite, finishing fifth after setting the early pace.

Sobradora Inc, unraced since last December after compiling a perfect record in Argentina, including victories in two Group One events, went postward at 9-1 and returned $20.40, $11.40 and $5.80 while earning first money of $47,400 in the mile and one-sixteenth contest over Del Mar’s infield Jimmy Durante Turf Course. Her career bankroll now is $242,729. Final time was 1:40.89.

The four-year-old daughter of Include is owned by Katsumi Yoshida of Hokkaido, Japan and trained by Simon Callaghan.

Runner-up Prize Exhibit, who closed gamely despite traffic trouble in the stretch, paid $9.20 and $4.80, while Electrum returned $2.80 to show.

Sobradora Inc capped a consecutive riding triple for Bejarano, Del Mar’s four-time defending champion. Bejarano won the fifth race on Noted and Quoted at $2.80 and the sixth race on Tribal Jewel at $6.80 prior to the Osunitas Stakes.

Sunday’s attendance was 11,646. Racing resumes Wednesday with a first post time of 2 p.m.