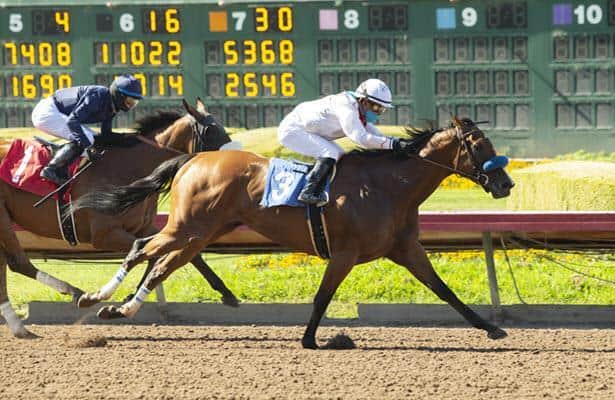 Owned by breeder KMN Racing LLC and trained by Hall of Famer Jerry Hollendorfer, Sneaking Out, a 7-1 shot, upset heavily-favored Bellafina in the $201,000 Great Lady M. Stakes (G2) at Los Alamitos on Saturday.

It was the fifth win in the 11th start for Sneaking out and the first in a graded event for the 4-year-old California bred daughter of Indian Evening.

Positioned outside pacesetter Artistic Diva by jockey Martin Garcia, Sneaking Out took over inside the final quarter of a mile and prevailed by three-quarters of a length over Bellafina, the 1-2 choice who was seeking her eighth graded win.

The win was the second in the Great Lady M. for Hollendorfer, who captured the inaugural running in 2014 with another Cal bred – Doinghardtimeagain for owner-breeder Tommy Town Thoroughbreds.

“That was nice,’’ said Hollendorfer. “She was laying outside and she got a little breather around the turn and when (Garcia) asked her to go she had a lot left. She finished up really well.

“I thought she could be the speed if she wanted, but we learned at Oaklawn Park that she didn’t have to have the lead. She ran a huge race there (April 25) where she got passed, then came back on and won the race.’’

Sneaking Out, who has been worse than second only twice, increased her earnings to $431,441.