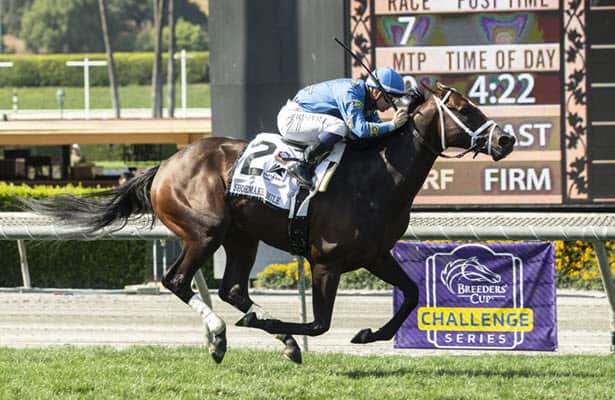 With superstar jockey Flavien Prat returning from New York to ride him on Memorial Day at Santa Anita, Monday, Cannon Thoroughbreds’ homebred Smooth Like Strait looms large among a half dozen 3-year-olds and up on turf in the Grade 1, $500,000 Shoemaker Mile.

Originally run at Hollywood Park in 1938 and renamed to honor legendary Hall of Fame jockey William Shoemaker, the Shoemaker Mile is a Breeders’ Cup “Win & You’re In” Challenge Race qualifier, with the winner earning a berth in the Breeders’ Cup Mile at Keeneland on Nov. 5.

Most recently third, beaten a neck in the Maker’s Mark Mile (G1) at Keeneland April 15, Smooth Like Strait has had a string of five narrow defeats since winning last year’s Shoe Mile on May 31, finishing second four times and third once.

A 5-year-old horse by Midnight Lute out of the Flower Alley mare Smooth as Usual, Smooth Like Strait has by all accounts, trained very well for his Shoemaker Mile defense, posting a half mile at Churchill Downs on May 5 in 47.4 seconds, third best of 81, five furlongs here on May 16 in 59.4 seconds, best of 28, and a half mile in 48.8 seconds, on May 23, which ranked 24th of 55 at the distance.

Also exiting the Maker’s Mark Mile at Keeneland April 15 is Count Again, one of three Phil D’Amato-trained entrants in the Shoemaker Mile.  In a big effort, Count Again rallied to finish sixth, beaten just 1 3/4 lengths at odds of 6-1.  Off as the 2-1 favorite in the Frank E. Kilroe Mile (G1) two starts back on March 5, he rallied for a head victory under Flavien Prat, who also rode him to victory here three starts back in the Grade 2I Thunder Road Stakes Feb. 5.

With Prat committed to Smooth Like Strait, three-time Eclipse Champion Irad Ortiz, Jr. will be aboard for the first time on Monday.  A winner of four out of his seven starts at one mile on grass, Count Again, a 7-year-old Ontario, Canadian-bred gelding by Awesome Again, appears at the top of his game for owner/breeder Sam-Son Farm and Agave Racing Stable.

Second beaten 1 1/4 lengths going a mile and one quarter on turf in the Charles Whittingham Stakes (G2) here April 30, Masteroffoxhounds, who will be making his first start for D’Amato, would appear better suited at longer distances but did have a win and a second from five starts going one mile on turf in Ireland at age three.

Owned by Rockingham Ranch, Masteroffoxhounds, a 5-year-old horse by War Front out of the Galileo mare Outstanding, posted two wins, including a victory going a mile and one quarter on turf in the San Marcos Stakes (G2), from nine stateside starts with trainer Richard Baltas.