Smith: Midnight Bisou 'belongs' with the boys in the Saudi Cup 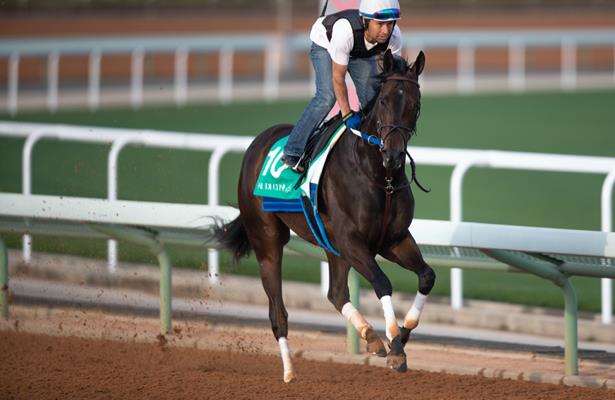 Of the five American horses contesting Saturday’s $20 million Saudi Cup, none have more Grade 1 wins than Midnight Bisou’s five. But all those scores came against only female runners.

Jockey Mike Smith hopes to pilot Midnight Bisou to the winner’s share of the biggest purse in horse racing history.

“I mean, she’s up against the boys, and they’re not just the boys,” Smith said in an interview with the Thoroughbred News Service. “They’re probably the best boys in the country and the world right now.

RELATED: Saudi Cup post times, fields and how to watch

“But she belongs in that category. Her numbers say so. Her record has shown so. Her times say so, everything she’s done. She’s training extremely well going into this race -- maybe even better than she was going into the Breeders’ Cup.”

Midnight Bisou hasn’t started since a second-place run Nov. 2 behind Blue Prize in the Breeders’ Cup Distaff. That was the only time in eight 2019 starts she didn’t cross the wire first.

In the Breeders’ Cup, Smith kept the even-money favorite Midnight Bisou along the rail in mid-pack through the second turn. Smith tilted the filly out four-wide entering the stretch, where she kicked on well but didn’t have enough to get by Blue Prize, losing by 1½ lengths.

The Saudi Cup will run Saturday at the same 1 1/8-mile distance as the Breeders’ Cup Distaff, but in a one-turn format at King Abdulaziz Racetrack.

“She should love it, to be honest with you," Smith said. “The kickback over there is not too strong, so that’ll help as well because we’ll be coming from (off the pace), whereas here in the Breeders’ Cup, it was coming back so hard that she couldn’t hardly run through it. It closed her eyes up and everything. She had a pretty big excuse. So with a good trip, plenty of pace in the race, she should come running.”

Owners Bloom Racing Stable, Madaket Stables and Allen Racing announced intentions to bring back Midnight Bisou for another season the morning of her Breeders' Cup race.

“She’s going to have to run her A-plus race, there’s no doubt about it,” Smith said. “But she’s capable of it and she usually does. When she does, she’s hard to beat.”