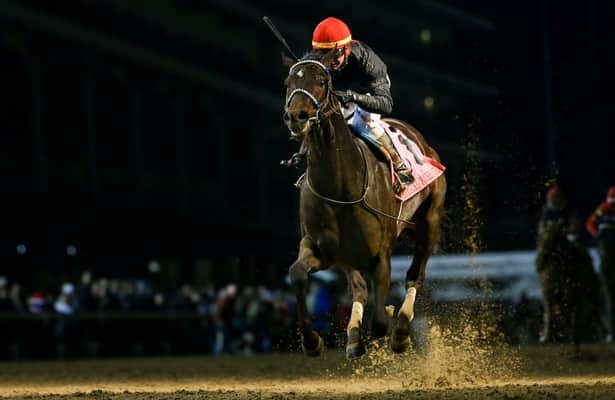 Brian Lynch trained the post-time favorite Saturday night in the Grade 2, $400,000 Kentucky Jockey Club at Churchill Downs. And he lost.

But Lynch could not help but admire the impressively dominant display from the 9-2 victor Smile Happy.

“The winner just seemed to freak,” he said. “Our guy just got outrun.”

And how. Owned by the Mackin family of Louisville under the name Lucky Seven Stable, Smile Happy closed from mid-pack and charged down the middle of the track to a runaway, 3 1/4-length victory in the latest 10-4-2-1 points prep for next year’s Kentucky Derby.

“Oh, yeah,” Lanerie said. “It was freaky good. I had worked him and been on him only one other time, and he showed me that in the morning.”

“He really is,” McPeek said when asked about Lynch’s use of horse racing’s most complimentary “F” word. “He is a really, really nice horse. He’s kind of inconspicuous in that, when he trains, he’s just a real pro. He goes out there and does everything. What he showed today was completely another level.”

It ended day of highs and one low for McPeek, who won four races on a 54-degree day at Churchill Downs. He also had to scratch Tiz the Bomb, the 3-1 morning-line favorite, three hours before the Kentucky Jockey Club because of what he believed to be a light blister on the left front leg.

“It’s been a rollercoaster,” said McPeek, 59. “It’s just one of those things. We dealt with it in the spring with King Fury. He got sick the day before (the Derby). The older I get, I guess the better I take it.”

It got a lot easier when McPeek saw Lanerie put Smile Happy in mid-pack on the backstretch in the feature, 2 1/4 lengths off the early pace set by Howling Time (2-1). Even though he was going four-wide into the turn and racing in the six path going down the stretch, Lanerie felt like he was loaded for bear.

“Today, when I was on the outside,” Lanerie said, “I was never in doubt.”

“Corey did great job getting him in position where he could set on the outside,” McPeek said. “He was just stalking, and this horse is really smart.”

At the end, with Howling Time fading to finish fifth, it turned into a two-horse race between Smile Happy and Lynch’s colt Classic Causeway (7-5). Or so it seemed.

“Brian Lynch’s horse is really good horse, and he ran a really big race,” McPeek said. “I was scared of him. But I think they'll be seeing each other again.”

“We’ll go down to Florida and try to go from second to first,” Lynch said.

Unknown is how the race might have gone had Tiz the Bomb been able to go. McPeek said he expected antibiotic treatment to bring the colt back to full health quickly, certainly in time for him to mix it up at Gulfstream Park this winter with Derby contenders. Tiz the Bomb already knows one of his rivals very well, since they are both in McPeek’s stable.

“I actually worked (Smile Happy) against Tiz the Bomb, and I thought I was moving better,” Lanerie said. “We just went easy, so it was hard to tell. The other horse has proven himself, but it was certainly a confident work.”

In that sense, then, Tiz the Bomb had a role in the victory.

“Smile Happy and him worked together last weekend,” McPeek said, referring to their 1:00.0 breezes over five furlongs at Churchill. “Smile Happy actually handled him pretty well. There wasn’t a lot of separation in the workout, but Smile Happy, we certainly knew he deserved to be in here.”

McPeek has had memorable wins in the Belmont Stakes, with 70-1 Sarava in 2002, and the Preakness, with the filly Swiss Skydiver last fall. He still needs the Kentucky Derby to complete a career Triple Crown. With Smile Happy, Tiz the Bomb, Breeders’ Futurity (G1) winner Rattle N Roll and maiden winner Lucky Boss, he has one of the best strings of 2-year-olds in his career.

“This is probably the best I’ve had, yeah,” McPeek said, comparing this group to 2001-02. “Repent had won this race, and Harlan’s Holiday had won the Iroquois, and Sarava had just broken his maiden that fall. That was a long time ago. That was 20 years ago.”

Laughing about that distant memory, McPeek brought it all back to now.

“We’re going to have a cocktail.”

With a toast, no doubt, to that freak named Smile Happy.